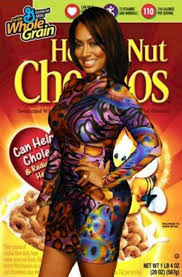 We’ll probably never know what Kevin Garnett said to Carmelo Anthony Monday night, but Doc Rivers flatly denies the Cheerios comment. “I know what’s being reported did not happen,” the Celtics coach said Thursday on WEEI radio in Boston. “I know that as a fact.” Anthony, who was suspended for last night’s 81-76 loss at Indiana, declined to spell out exactly what KG said during Monday’s game. “There’s certain things that you just don’t say to men, another man,” he said. It was reported that KG said Melo’s wife, La La Vasquez, “tastes like Honey Nut Cheerios.” La La herself chimed in on Twitter by saying: “Not for nothing, but we ALL deserve a check or some free cereal 4all the publicity we’ve given Honey Nut Cheerios! LOL.” The Knicks are now 3-4 without Melo this season and overall have lost 7 of 12 heading into tonight’s tilt against the Bulls. Anthony was ejected the last time the team’s played and said he was anxious to play them this time. “Chicago-New York game will always be a physical game,” Melo said Dec. 21 following a 110-106 loss. “We see them again Jan. (11), though, back here in the Garden. We will be prepared for that.”