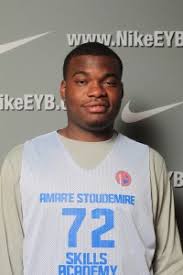 Dominic Woodson is down to two schools — Baylor and N.C. State — and a decision could come fairly soon. “He’s not going to take his Oklahoma visit this weekend so I would look for a decision on that one pretty quick,” Huntington Prep coach Rob Fulford told SNY.tv Tuesday morning. “I would think he’s probably going to take the weekend, talk it over with his famly and I would anticipate it being pretty soon.”
The 6-foot-10 Woodson visited Baylor this past weekend and N.C. State the weekend before.
“It went well,” Kevin Robinson, Woodson’s AAU coach, told SNY.tv of the Baylor visit. “I like the staff and the team looks pretty deep this year. Next year they will have a need for bigs but will have really good guards already in place. “If he chooses there it would be a great place to continue his education and basketball career.” Woodson previously said N.C. State head coach Mark Gottfried told him the bigs will be involved in the offense. “They would put me in the post and bring me out to the top of the key, to the free throw line” Woodson said. “They would let me pass. Just explained to me what my role would be. The big man touches the ball every down the court.” Woodson hopes to decide within a week or so. “I’m going to decide coming up pretty soon,” he said. “I think in November.”