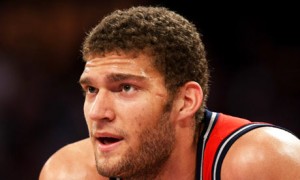 EAST RUTHERFORD, N.J. – The fact that Nets General Manager Billy King has spent considerable time over the last two years trying to trade for Dwight Howard at the expense of Brook Lopez is not an indictment on Lopez. It is simply King trying to improve a team whose owner, Mikhail Prokhorov, has given seemingly endless resources to try and make better. When the very public negotiations between King and first-year Orlando Magic GM Rob Henningan reached an impasse, King moved quickly,  locking up Lopez on July 11 for four years and $61 million with the team that drafted him 10th overall in the 2008 NBA Draft. Despite playing only five games in 2011-12 thanks in large part to a broken right foot, Lopez isn’t quite a consolation prize in the Dwight Howard Sweepstakes, not with career averages of 17.4 points and 7.5 rebounds. Lopez, who had played in all 246 games over his first three seasons, remains a centerpiece in the Nets’ move to Brooklyn. “I’m so happy that I’m still a Net,” Lopez said when he was re-introduced on July 18. “It’s what I’ve wanted this entire offseason through the whole free agency process. I just want to be a Net my entire career.” With Howard gone to the Los Angeles Lakers and Lopez re-signed, this is the first training camp in a while that King and his team can go in with a collective clear head and get right down to business. “I don’t have to think about that, I don’t have to worry about that, I don’t have to figure out how to dodge your questions about that,” King quipped on Tuesday at the PNY Center when the topic of persistent trade rumors of the past came up. “The guy I feel happiest for is Brook Lopez because now he can go to training camp not dodging the questions or hearing about the questions. He knows he’s here, he’s part of the foundation we’re building here and I told him that when we agreed on the deal. I said, ‘I’m happy for you because now you can focus on being the best player Brook Lopez can be.'” Lopez earned his big pay day through his play, having averaged a career-high 20.4 points per game during his last fully-healthy season in 2010-11, but one may also feel satisfaction for Lopez for several other reasons. He is one of the franchise’s most recognizable figures, both on the court and in the community, but he has also persevered through some dark, indifferent days in the final seasons in New Jersey. In Lopez’s four seasons with the Nets, the team has a record of 92-220, including the infamous 12-70 2009-10 season. The team is on its third head coach, second General Manager and third arena in Lopez’s career while it played in front of an apathetic, absent fan base in New Jersey the last two seasons. For Lopez, now healthy and playing 5-on-5 with no restrictions after his injuries, this must feel like a new beginning. “I think the sky’s the limit with him,” King said. “For two years, his mind has been distracted, not only with injuries, but will he be a part of this. I’ve always given him credit for being invested in something he wasn’t sure if he was gonna be a part of. But now, he knows he is here.” Follow Josh Newman on Twitter

Billy King: "Most Nights, We're Going to Have the Advantage"

Clyde: Pressure Is On The Nets to Match Expectations