Billy King: "Most Nights, We're Going to Have the Advantage" | Zagsblog
Follow @adamzagoria

Billy King: “Most Nights, We’re Going to Have the Advantage” 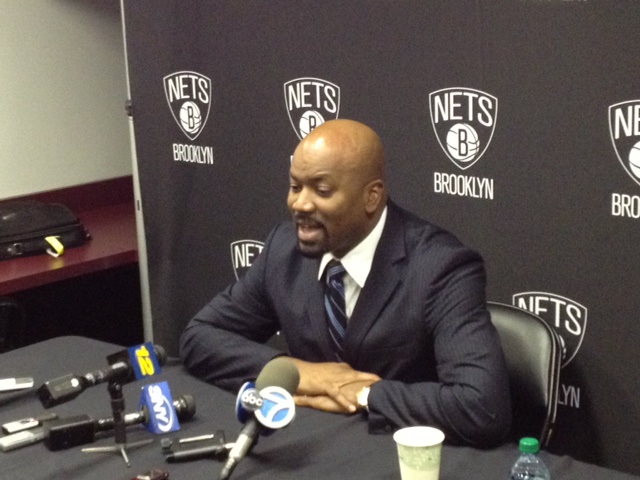 EAST RUTHERFORD, N.J. – After a move across the Hudson River, a brand new arena,  a complete overhaul of the team’s color scheme and an offseason spending spree, the Brooklyn Nets are finally one week away from training camp and arguably the most important season in franchise history. The man who spent hundreds of millions of owner Mikhail Prokhorov‘s dollars this past summer, General Manager Billy King, addressed the media at the PNY Center on Tuesday morning and among all the topics covered, his feelings on his new team are quite clear. “I think those five (starters), we can match up with anyone the court,” King said. “Out of the five, most nights we’re going to have the advantage.” The mild-mannered King may sound a bit bold with that proclamation, but he may not be wrong after the summer he had. King re-signed Deron Williams, Gerald Wallace, Kris Humphries and Brook Lopez. He also pulled off a trade for Joe Johnson, who will slide right in as the starting shooting guard. “I think it will take us a little while to jell as an organization because we have a lot of pieces now that have to incorporate themselves,” King said. “I knew we had a great point guard (Williams) and a great center (Lopez). We had traded for a small forward (Wallace) that can do a lot and we re-signed our power forward (Humphries). From there, it was about building a team, getting a 2-guard (Johnson) and adding guys on the bench.” That starting lineup, with one of the elite point guards in the game in Williams at the helm, has helped to enhance the perception of the Nets, who are now viewed as at least a contender in the Atlantic Division. King referenced 2001 when he was the General Manager of the Allen Iverson-led Philadelphia 76ers team that many feel played above its head and advanced all the way to the NBA Finals. King noted that team’s bench did a phenomenal job of pushing the starters that year. He feels this Nets team as constructed with this bench can be comparable to that 2001 Sixers outfit. Amidst the spending spree, King was able to sign seasoned veterans like Keith Bogans, Jerry Stackhouse, Josh Childress and Andray Blatche for next to nothing. Additionally, he added Euroleague scoring sensation Mirza Teletovic for the mini mid-level exception of three years and roughly $9.7 million. “That’s what the good teams have,” King said. “Look at Miami. “Their bench guys pushed their starters this year and that’s how you win a championship. We have a lot of guys that have played starting minutes and they now have to find their roles here. That’s the great thing about practice, competition breeds success.” So with the franchise where it is now, plus the added expectations of having a competitive, winning team in a brand new building, is Prokhorov’s prediction of an NBA title within three seasons fair? King didn’t seemed too deterred when the topic was broached on Tuesday. “I’m excited he says that, because that means he’s committed to winning,” King said. “Not every owner in professional sports is committed to winning, they’re committed to the bottom line. He’s committed to winning a championship and when you’re committed to winning a championship, they’re willing to make bold decisions like we did in July.” “I didn’t come here to just have a job and hopefully we make the playoffs.” The Nets will hold training camp at the PNY Center from Oct. 2-7 and will open the preseason on Oct. 13 against the Sixers at Atlantic City’s Boardwalk Hall. The much-anticipated season opener with the Knicks on TNT is set for Nov. 1. Follow Josh Newman on Twitter