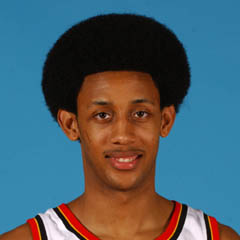 The Nets officially agreed to terms with free agent guard Josh Childress on Thursday afternoon and in doing so, have likely completed their opening night roster as their first season in Brooklyn is quickly approaching. The six-year veteran, who was amnestied in mid-July by the Phoenix Suns, will play under a one-year, non-guaranteed contract in Brooklyn. Despite that, he is considered a near-lock to make the team. Based on his six years of service, Childress will make roughly $1.07 million. After being amnestied by the Suns, Childress is still owed $21 million over three seasons, but he will not count against their salary cap. After completely revamping his roster, Nets General manager Billy King now has 15 players under contract. As it stands now with the non-guaranteed signings of Childress on Thursday and fellow-amnesty victim Andray Blatche on Wednesday, this roster will likely be the one opening the season against the Knicks at the Barclays Center on Nov. 1. Childress holds career averages of 9.5 points and 4.9 rebounds 373 games over his six seasons. However, he may be best known for his decision to leave the NBA during the 2008-09 and 2009-10 seasons. The No. 6 pick in the 2004 NBA Draft, Childress had made a name for himself as a solid sixth man for the Atlanta Hawks, averaging double figures in points in each of his first four seasons. However, in July of 2008, he made the unprecedented move of signing a 3-year, $20 million deal with Greek EuroLeague power Olympiacos. That contract was essentially tax free and the $20 million would have been $32.5 million before taxes in the United States. Childress turned down a 5-year, $33 million deal to stay with Hawks, citing the fact he would be making more money in Greece. Childress spent two solid years in Greece before spending the last two seasons with the Suns. He has yet to return to the player he was with the Hawks though, averaging 5.0 points in 54 games in 2010-11 and 2.9 points in 34 games during a lockout-shortened 2011-12. Follow Josh Newman on Twitter

Billy King: "Most Nights, We're Going to Have the Advantage"