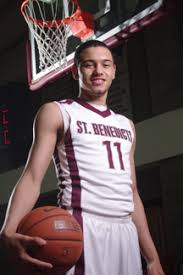 NEWARK — Tyler Ennis is looking forward to a senior year at St. Benedict’s Prep in which he no longer has to worry about recruiting. Having committed to Syracuse, the 6-foot-3 point guard can now focus solely on trying to win games win the Gray Bees, who figure to be among the top five high school programs in the nation once the polls come out. “It feels good to focus on getting better and not worrying about the whole recruiting process and returning phone calls,” said Ennis, who committed to Syracuse, his dream school, Aug. 16. “Now I’m just focused on this last season and getting ready for this year.” Still, Ennis hasn’t stopped recruiting other players to join him at Syracuse, most notably 2013 forward Jermaine Lawrence, 2013 center Beejay Anya, 2014 guard Isaiah Whitehead and 2014 forward Chris McCullough. “Yeah, yeah, of course,” Ennis said. “Chris McCullough was at the [Syracuse] Elite Camp with me so we were both playing down there. Isaiah Whitehead was playing there. Beejay Anya, Syracuse is in the mix with him, too. I see Jermaine  Lawrence every week at the Fall Ball. So those are the guys that I know pretty much and I’ll work on them.” Mostly, though, Ennis is looking forward to blending last year’s St. Ben’s returnees like 2015 guard Isaiah Briscoe and 2013 forward Denzell Taylor with new faces like Pittsburgh-bound 2013 forward Mike Young and 2014 former St. Patrick guard Johnathan Williams. “I think if we get the chemistry like we did last year and start putting it together then we could be the same as year,” said Ennis, whose team went 35-3 a year ago. “We can only get better with the talent we have.” BRISCOE PICKS UP NOVA OFFER, WILL VISIT ARIZONA

Briscoe recently picked up an offer from Villanova and will visit Arizona for the Red-Blue Game Oct. 21. “I like them, ‘Point Guard University,'” Briscoe said of Arizona. His sister, Iasia Hemingway, plays for the Syracuse women’s team, and Briscoe has visited frequently. But he wants it made clear they’re not his favorite. “They’re not my leader,” he said. “Syracuse is just Syracuse. My sister is there so I’m always up there. They’re not necessarily my leader. A lot of people think that because my sister went there and I’m always up there.” Briscoe was also invited to the  2012 USA Basketball Men’s Developmental National Team mini-camp on Oct. 6-7 at the U.S. Olympic Training Center in Colorado Springs, Colo. He will join fellow New Jersey players Malachi Richardson and Asante Gist of Roselle Catholic and Timothy Delaney of Pitman and New York’s Jesse Govan of St. Mary’s. “I was kind of shocked I got invited,” Briscoe said. “That’s what I worked hard for. “I want to be in better shape than I am now. I’ve been running every day before practice. I’m ready to go.” TAYLOR MULLING VISITS LIU head coach Jack Perri and Binghamton assistant Ben Luber attended practice Wednesday for Taylor, a 6-7 forward who is considering those schools along with Fordham, Temple, New Mexico and Wagner. His father lives in Teaneck, N.J., and Taylor is inclined to stay local. He may soon take an unofficial to LIU. “He’s just a hard worker,” Ennis said. “He’s one of those guys that he might not be on the stat sheet as much as everybody else, but he impacts the game like nobody else. All the rebounds he gets for us, the charges, that just brings us together more, to see somebody play so hard for us.” FREE THROWS West Virginia’s Bob Huggins and Larry Harrison, Seton Hall’s Kevin Willard, North Carolina’s Hubert Davis, Ohio State’s Chris Jent and a Michigan assistant watched 2015 St. Joe’s-Metuchen big man Karl Towns Tuesday. Jent also stopped by Roselle Catholic for Richardson, a 6-5 2015 point guard, and Harrison will see him Wednesday…2014 F Terry Harris, younger bro of Tobias & Tyler, will take unofficials to UConn Wednesday & Georgetown Sunday.