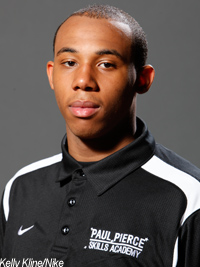 Sam Davis, the father of Xavier recruit Myles Davis, has hired an attorney to battle the NCAA after his son was declared ineligible for the upcoming season. Sam Davis told SNY.tv he has retained Stuart Brown of Ice Miller LLP in Indianapolis to handle the case. “We have retained a law firm to see if could do something about this decision by the NCAA,” Davis said. “This firm has dealt with issues in the past against the NCAA and they feel that there be a chance to change the ruling.” As reported by CBSSports.com, the NCAA ruled Davis and Sam Cassell Jr. ineligible because of classes they took at Fitchburg (Mass.) Notre Dame Prep during the 2011-12 school year. CBS reported that eight of their classmates who took the same classes were allowed to play college basketball last season. Davis said Cassell Jr. has not retained the attorney. Davis said his plan was to take out loans so that his son could attend Xavier this year as a non-scholarship student. “I’m still applying for loans because Myles wants to stay at Xavier,” Davis told SNY.tv. “Although there were a lot of options, he wants to stay there to see if we could make it happen. It’s a tough situation.”