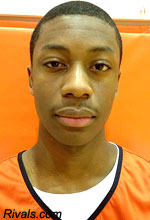 Robert Hubbs Sr. said that Tennessee coach Cuonzo Martin went above and beyond the call during his recruitment of his son, and that’s why the 6-foot-3 Hubbs committed during an official visit Sunday night. “Yeah, he committed to Tennessee,” Hubbs Sr. told SNY.tv by phone Monday. “Coach Martin has really done a fine job in the recruiting process. He’s been around to several events. He’s done a lot of little things that caught the eye of people. He sent a handwritten card to my wife on Mother’s Day. He sent the school a card saying thanks for letting me come into the gym and recruit Robert. “All summer he’s been around in the front row at events recruiting my son and when he wasn’t he sent a text message saying, “I wasn’t able to make the trip but I’ll be back.” Hubbs, the Rivals No. 12 shooting guard out of Newbern (Tenn.), picked Tennessee over Duke, Vanderbilt and Auburn and interest from Kentucky, his father said. He gives Martin a legitimate in-state and national star around which to further rebuild the program going forward. “We went to visit them this weekend and the fans really love him and he felt at home,” Hubbs Sr. said. “We got a chance to meet the rest of the coaching staff and it felt like a family. “When he saw the presentation that Tennessee had to offer and everything they had to offer, he knew right then he had seen enough.” He added: “He just wants to go out there and get the job done and win.”