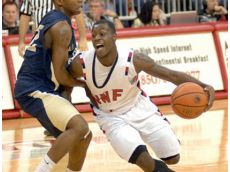 Louisville has nabbed maybe the best available point guard out there and has it’s floor general for the post-Peyton Siva era. Chris Jones of Division I JUCO power and 2012 national runner-up Northwest Florida State offered up a verbal commitment for 2013 to head coach Rick Pitino and the Cardinals on Monday morning. “He visited Louisville over the weekend and came back and told me how much he liked it,” Northwest Florida State head coach Steve Forbes told SNY.tv. “Then he slept on it and I asked him [Monday morning] if he felt the same way and then he called coach Pitino. “It’s a unique opportunity for a junior college kid. He won a high school state championship. In junior college he played for the national title last year. Now he’s put himself in a great position to win a national title at the four-year year level so it’s a great decision for him.” The 5-foot-10 Jones, who played his high school basketball at Melrose High School in Memphis, chose Louisville over Baylor, Memphis, Kansas and Florida State. Jones had lined college visits before choosing Louisville, including Florida State on Sept. 21 and Kansas on Oct. 12. He had already visited Baylor. In 2011-12 as a freshman, Jones quarterbacked the Raiders to a 26-1 record, an appearance in the NJCAA Division I national championship game and a No. 2 ranking in the final JUCO National Top 20 poll. Playing all 27 games, Jones averaged a team-high 18 points, 4.5 rebounds and 4.1 assists per game. “His biggest strength is his competitiveness,” Forbes said. “He can score, he can pass, he can defend but his biggest strength is his competitiveness and his will to win. He’s one of the most competitive kids I’ve ever coached at any level. And that’s going to bode well for him at the level that Louisville plays at.” Follow Josh Newman on Twitter