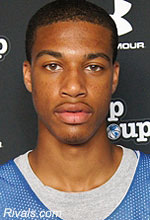 NEW YORK — Syracuse may be headed to the ACC in 2013, but the Orange could take some of New York City’s best players with them. Chris McCullough, a 6-foot-10 2014 forward from The Bronx, told SNY.tv exclusively that he has talked with several fellow New York stars about playing together for Syracuse coach Jim Boeheim. “We talked about it twice already, me, Jermaine [Lawrence] and Isaiah [Whitehead]. We said it would be a good fit for all three of us,” McCullough said after going for 14 points, 8 rebounds, 2 blocks, 2 assists and 1 steal in team NYC’s 87-86 loss to team USA Saturday night in the Big Strick Classic at City College of New York. Lawrence, a 6-10 2013 forward from Queens who plays at Pope John in Sparta, N.J., went for 10 points and 11 rebounds in the loss and shook off a leg injury late in the game. Whitehead, a 6-4 2014 shooting guard from Brooklyn Lincoln, added 12 points, 8 rebounds, 5 assists and 1 steal and got into it verbally with Andrew Harrison (15 points, 6 rebounds, 6 turnovers) of team USA. As previously reported by SNY.tv, both McCullough and Whitehead will visit Syracuse late in August for their Elite Camp. Lawrence is not expected to attend. Still, all three players are very high on Syracuse. “I like the way [they play] their transiton offense, I like their coaching style and the players are good people,” McCullough said of Syracuse. Before visiting Syracuse, McCullough — a potential one-and-done in college — will visit Seton Hall today (Sunday) along with Hudson Catholic small forward Reggie Cameron. “I’m just going to see if I like it [Sunday],” McCullough said of Seton Hall. “I’m going to see their practice [Sunday].” Seton Hall is prepping for a trip to Spain beginning Monday. Meantime, the Orange are also the clubhouse favorite to land St. Benedict’s Prep 2013 point guard Tyler Ennis, who was on the USA roster for the game but was held in Toronto, along with CIA Bounce teammate Andrew Wiggins, due to weather issues. Ennis is expected to announce his choice sometime this month, with Illinois, Louisville, Memphis and UCLA also in the mix. Throw in 2015 St. Benedict’s combo guard Isaiah Briscoe of Union, N.J., whose sister attends Syracuse, and the Orange are in the mix for a bevy of talented area stars.