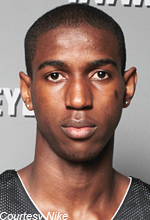 Kentan Facey didn’t need many visits to pick his school. The 6-foot-9 Long Island Lutheran forward committed to UConn late Wednesday night after visiting the school on his first trip in August. The news was first reported by the New York Post. “He committed late last night,” Rens coach Kareem Memminger told SNY.tv. “It’s great situation. He’ll get playing time right away. The postseason ban [in 2013] won’t affect him at all. They just went for one year. It doesn’t affect him.” A native of Jamaica, Facey had a strong summer, picking up offers from schools like USC, UCLA, Louisville, Pittsburgh, Memphis, St. John’s, Providence and Rutgers. He was to have visited St. John’s Friday and Rutgers next week, but pulled the trigger for UConn instead. “It just felt right at the moment,” Facey told the Post. “Everything was just perfect — the situation, the campus is beautiful, the coaching staff is superb, all of that came together.”Facey committed on the visit despite UConn head coach being out after suffering a fractured hip during a recent biking accident. With head coach Jim Calhoun sidelined after surgery for a fractured hip suffered during a bike accident, assistant coach Kevin Ollie hosted the visit. “It was a nice visit and the coaching staff did a nice job,” Memminger said. Added Memminger: “They don’t have what he brings. He’s a face-up four, can shoot it from the outside. They have a desperate need for bigs on the front line. He can play 25 minutes a game, he was their top choice for a big man. They really wanted him and they showed that on the visit. “When you meet with the President [Susan Herbst], they’re not playing with him.”