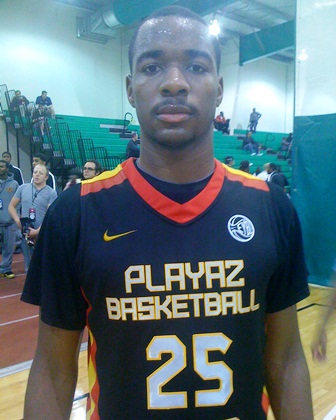 St. Benedict’s Prep senior power forward Mike Young appears set to make his college decision earlier than expected and in doing so, he may very well be heading home. Sources told SNY.tv on Friday afternoon that Young, a 6-foot-8 Pittsburgh native, is down to Pitt and the University of Florida and will announce his intentions at a family event on Saturday. With offers from UConn, N.C. State, Memphis, Xavier, St. John’s, West Virginia, Pitt, Rutgers, Florida, Miami, Seton Hall and Georgia Tech, among others, Young told SNY.tv late last month that he would take visits this fall and announce in November, but those plans have changed. “After the live period, in August I’m going to cut it down within the second or third week,” Young said on July 26 at Live in AC. “September and October I’m going to take visits. I’m going to try to commit around November, Thanksgiving.” Young had a monster summer with the Playaz and after he makes his college decision on Saturday, will gear up for a high school season that could potentially end with a mythical national title. Young is transferring from North Jersey powerhouse Hudson Catholic to another North Jersey heavyweight in St. Benedict’s Prep, which has a roster that will likely be able to compete with any high school in the country. In addition to Young, Gray Bees coach Mark Taylor will have 2013 point guard Tyler Ennis, 2015 guard Isaiah Briscoe and 6-foot-10 freshman sensation Rodney Miller among others. Follow Josh Newman on Twitter