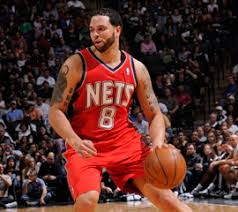 By JOSH NEWMAN Special to ZAGSBLOG EAST RUTHERFORD, N.J.  – At some point in the middle of Billy King’s 45-minute, wide-ranging interview with the media on Wednesday morning at the PNY Center, Deron Williams quietly appeared, stood in the doorway and listened intently. At least one beat writer sitting near the front of the room got wise to Williams’ presence and asked King a question regarding his soon-to-be free agent point guard in an effort to at least get a reaction from the Brooklyn Nets’ General Manager. King smiled and balked, Williams smiled and was then on his way. The point is not that King shied away from answering or reacting, nor is it that Williams left when his name came up. The point is that with the free agency negotiating period set to commence on Sunday at 12:01 a.m., the league’s biggest free agent still wants to be at his current team’s practice facility working out. Despite the NBA Draft happening on Thursday evening, this is still the biggest story regarding the Nets right now. With the team set to become the first professional sports franchise in Brooklyn since the Dodgers skipped town in 1957, the team is looking to secure one of the NBA’s premiere point guards to usher it into arguably its most important era since its inception. Furthermore, they appear to be in a position to do just that. “It’s big, I won’t downplay it. I think it’s important for Deron, it’s important for the franchise, but I think when the decision is made, he’ll make a decision that is best for him and his family and we’ll act accordingly,” King said. “I would think this will be done pretty quick because he has the Olympics coming up and I think he said he’d like to have it done pretty quickly.” Under the new Collective Bargaining Agreement rules, the Nets can offer Williams the most years (five) and the most money (approximately $100 million). Williams is reportedly considering re-upping with the Nets or signing with his hometown Dallas Mavericks, who can only offer four years and approximately $74 million. “There is certainty coming, that’s the thing about it and we’re prepared either way,” King said. “I haven’t wavered or changed any feelings. I’m not overconfident and I’m not any less confident, I just feel good.” When Williams was traded to the then-New Jersey Nets on Feb. 23, 2011, it was clear this was a move for the future with the move to Brooklyn on the horizon. This was also a massive gamble by King seeing as how he gave up All-Star guard Devin Harris, 2010 No. 3 overall pick Derrick Favors, two first round draft picks and $3 million for an elite point guard, but also a player that had clashed with Jerry Sloan in Utah. Williams averaged 21 points and 8.7 assists in 55 games during the lockout-shortened, 66-game regular season in 2011-12 and last week, he officially decided to not exercise his 2012-13 player option worth $17.7 million. That sets the stage for Sunday at 12:01 a.m. and the Deron Williams Sweepstakes. Negotiating can begin Sunday, but signings may not commence until July 11. “I think he and I have a pretty good relationship. We talk, but it’s not always about basketball,” King said. “It’s always been my philosophy to get to know the player and that’s not just Deron, but all our guys. If you know them as people, you have a better chance at understanding what makes them tick and how they fit in with other players we bring in.” For his seven-year career, the former University of Illinois star is averaging 17.2 points and 9.2 assists per game. He has been an All-Star three times and won a gold medal with the 2008 Olympic team in Beijing. Photo: NBA.com Follow Josh Newman on Twitter