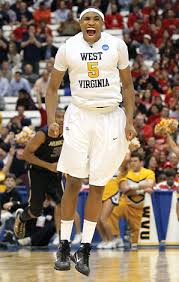 Kevin Jones‘ agent says the former West Virginia star has a guarantee from one team that he will be picked in the first round of Thursday’s NBA Draft. If that doesn’t materialize, he expects Jones to go in the second round. “A team in the first round has committed to him,” agent Bill Neff told SNY.tv. “The question is, what does that mean? I never trust anything other than what happens on draft night. “He’ll get drafted,” Neff added. “It’s either them in the first or early second.” Legendary Hall of Famer Jerry West also sees the Mount Vernon, N.Y., native going in the second round. And DraftExpress.com has the 6-foot-8 Jones going at No. 17 in the second round to the Utah Jazz. “He did OK in the first day of the combine,” West told Register-Herald.com. “But the second day of workouts with the (Los Angeles) Lakers he did not do nearly as well. “I think he probably will be drafted somewhere around the second round, if not in the first round. But we’ll see what happens when the draft starts.” Jones, who just missed out on Big East Player of the Year honors to Marquette’s Jae Crowder, averaged 19.9 points and 10.9 rebounds in his senior season under coach Bob Huggins. Thomas Robinson of Kansas, a fellow power forward projected as a top four pick, averaged 17.7 points and 11.9 rebounds. At 22, Jones is one year older than Robinson. “He just doesn’t excite you,” Neff said of the perception of Jones by many NBA decision-makers. “You’re going to pick someone else that excites you more and then go, ‘Sh–, we missed him.’ He’s going to make someone look stupid.” Jones has already worked out for Dallas, Boston, Atlanta, Miami, Oklahoma City, Chicago, Golden State, San Antonio and the Lakers. He’s slated to work out for Memphis Monday and then possibly Cleveland sometime before the draft. “We call him Donald Duck because everybody tries to duck him [in workouts],” Neff said, adding that several top players had declined to work out against Jones. Of those that have, Neff said Jones outplayed likely lottery picks Tyler Zeller and Meyers Leonard as well as Andrew Nicholson. “He just murdered them,” Neff said. “He’s not sexy, he’s just productive.”