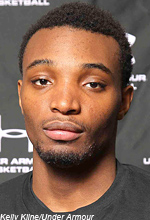 Josh Brown’s stock is on the rise and he’s decided to re-open his recruitment after pledging to Temple last season. “Yes, I did,” the 6-foot-2 2013 St. Anthony combo guard told SNY.tv after the news had previously been reported by several outlets. “The reason why I did is I don’t want to regret anything when all is said and done. I want to just enjoy the process. “Temple is still top on my list. The new schools I have now are Rhode Island, Gonzaga, Virginia and Richmond.” St. Anthony assistant coach Eric Harrield said he had also heard from Miami, Rutgers, St. Joe’s and Indiana. “We all agreed that it would be good for him to go through the recruiting process and make sure that he’s fully committed to the decision,” Harrield said. “He didn’t take any visits anywhere else.” Brown scored the game-winning basket in triple-OT last Sunday when Sports U beat the Playaz Basketball Club, 57-55, in the gold championship game of the Rumble in the Bronx, and his stock is taking off. “Winning the Rumble in the Bronx was a great experience because it was against the Playaz who are a very talented team,” Brown said. “Also making the game winning basket in the sudden death was pretty cool. I was excited to win my second MVP  during this year’s summer circuit. I also won it at the Pitt JamFest.” Now that he’s back on the market, expect the recruitment to pick back up. “I expect to get a lot of phone calls,” Harrield said.