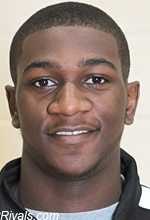 On the same day his Philadelphia Constitution teammate Daiquan Walker committed to UCF, Savon Goodman also made a verbal pledge. The 6-foot-6 wing chose UNLV over SMU and Pittsburgh, sources confirmed to SNY.tv. after Ryan Greene initially broke the news. “He’s a terrific athlete,” New York recruiting expert Tom Konchalski previously told SNY.tv of Goodman, who averaged 28 points and 14 rebounds this season. “He’s 6-6 and he has a motor with a four-year warranty. He plays extremely hard. “His athleticism has always surpassed by far his skill level. He’s improving as a shooter but the strength of his game is attacking the basket and second effort. He does play hard and he’s very athletic. The more athletic game they play, the better suited he is [to that school].” Goodman, a onetime Villanova pledge, continues UNLV’s run of strong additions in recent months, although head coach Dave Rice has said he might redshirt if UConn transfer Roscoe Smith gets a waiver to play immediately.. UNLV added Smith and added Pitt transfer Khem Birch, who becomes eligible at midseason. In terms of high school players, the Rebels got power forward Anthony Bennett out of Findlay Prep to join big man Demetris Morant, point guard DaQuan Cook and shooting guard Katin Reinhardt. Now Goodman gives them another athletic wing moving forward. “Savon is a tremendous athlete with NBA upside,” Constitution coach Rob Moore told SNY.tv. “He chose UNLV as it fits his desire to get up and down the court. He is very competitive and plans to fight for playing time from day one. “He came to Constitution with plans to qualify and win championships. Through hard work and effort he did both of those things. “He will be an asset to the UNLV family.” Asked if Goodman was fully qualified, Moore said, “Absolutely.”