Brown Lifts Sports U to Rumble Chip Over Playaz 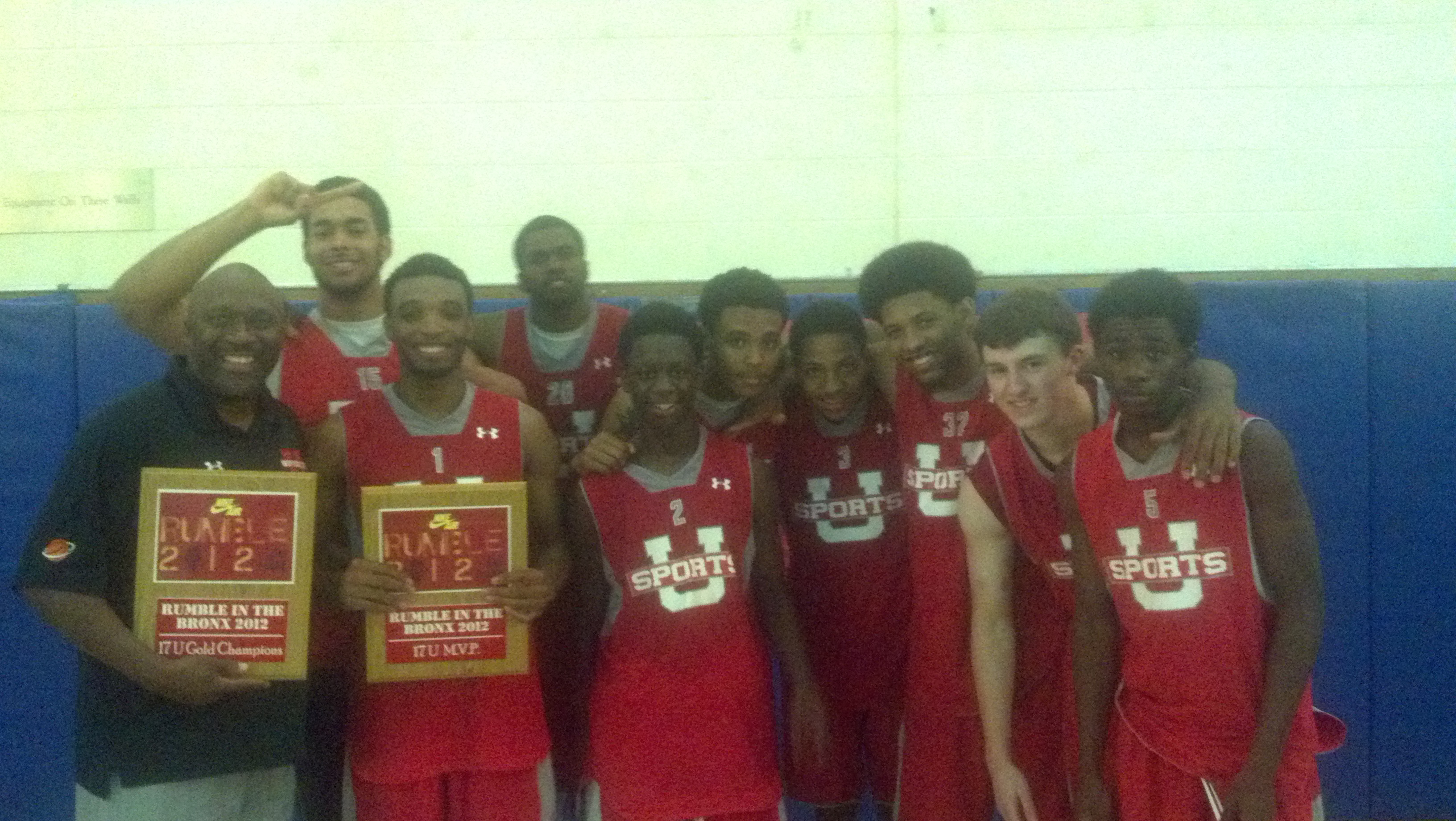 NEW YORK — In a wild game that featured many of the top players from North Jersey’s best basketball programs, Josh Brown finally ended the madness. Brown’s driving layup in sudden death of the third overtime led Sports U to a 57-55 victory over the Playaz Basketball Club in the 17U Gold championship at the Rumble in the Bronx at John Jay College. After the teams played a two-minute first OT and a one-minute second OT, the third OT went to sudden death after a tournament official called tournament organizer Jim Hart to confirm the event’s rules. The referees refused to call a foul for several minutes during the third OT despite several blatant fouls under the basket because they didn’t want the game to end on free throws. Ultimately, the Temple-bound Brown of St. Anthony scored on a driving layup to give Sports U the victory. “It was great and it was like a weight lifted off,” Brown, who finished with 10 points, 2 rebounds and 2 assists en route to MVP honors, told SNY.tv. “We should’ve wrapped this game up but they’re a good squad and we pulled it out.” Sports U previously won the Pittsburgh Jam Fest title in April. Brown won back-to-back New Jersey Tournament of Champions titles at St. Anthony alongside UCLA-bound point guard Kyle Anderson, who made an appearance at the final to root on the Playaz, but Brown said he had never before played in a game like this. “Playing for St. Anthony there’s been a lot of big games, but not [any] sudden death,” he said. Sports U, which features players from Seton Hall Prep, St. Anthony and arch-rival St. Patrick, edged a Playaz club with guys from Hudson Catholic and St. Benedict’s. Sports U built a 33-23 halftime lead and led by double-digits for much of the second half while riding the steady play of St. Anthony teammates Brown and Hallice Cooke, who finished 5-of-8 from beyond the arc for 15 points. But the Playaz made a run behind the strong inside play of St. Benedict’s forward Mike Young (19 points, 8 rebounds) and the continued penetration of point guard Shane Rector of St. Raymond’s (16 points). Young’s tip-in off a Rector miss put the Playaz up 47-46 with 3:18 left, but Cooke answered with a 3-pointer for a 49-47 Sports U lead. Kavon Stewart of Hudson Catholic and the Playaz forced the first OT when he hit two free throws to tie the game at 53. After a two-minute first OT, the teams were tied at 55. Reggie Cameron of the Playaz and Hudson Catholic missed a 3-point attempt off the window at the end of the one-minute second OT, forcing a third. Both sides had chances to win in the third period and several players appeared to get mugged on both ends near the basket, but no fouls were called. In the end, Brown was the first player to score a basket when he drove to the bucket for a layup, sending Sports U into celebration mode. “That’s the second time in a row we played them and we beat them, so I’m just happy,” Cooke said. “We try to make it another game. It always becomes more somehow because it’s such a big rivalry. “I respect those guys, they know me. We respect each other, so it’s the best of the best going at it and it was a good game.” FREE THROWS The UCLA-bound Anderson said he gets the pin out of his surgically-repaired left thumb June 20, the day before he departs for college. He is cleared to play hoops in August…Cooke, a part of St. Anthony’s back-to-back undefeated seasons, lists Rhode Island, VCU, Butler, St. Joe’s, Richmond, Oregon State and several Ivy League schools and plans to cut his list in September “after I take my officials.” He said he plans to commit in the fall before the season…The Playaz were missing St. Benedict’s Prep guard Isaiah Briscoe who was named to the Top 5 at the Nike Elite 100 in St. Louis. He may earn an invite to the LeBron James Skills Academy as a result…Playaz big man Neville Fincher plans to prep at Hargrave Military Academy, Lee Academy or New Hampton…The 6-1 Rector of St. Raymond’s told NBE Basketball he has offers from Providence and Hofstra and interest from Arizona, Iowa State, Georgetown, Pittsburgh, North Carolina State, Stanford, and UMass. “UMass is next week and [for] Pittsburgh we gotta make a date,” he told the site, referring to his upcoming visits.