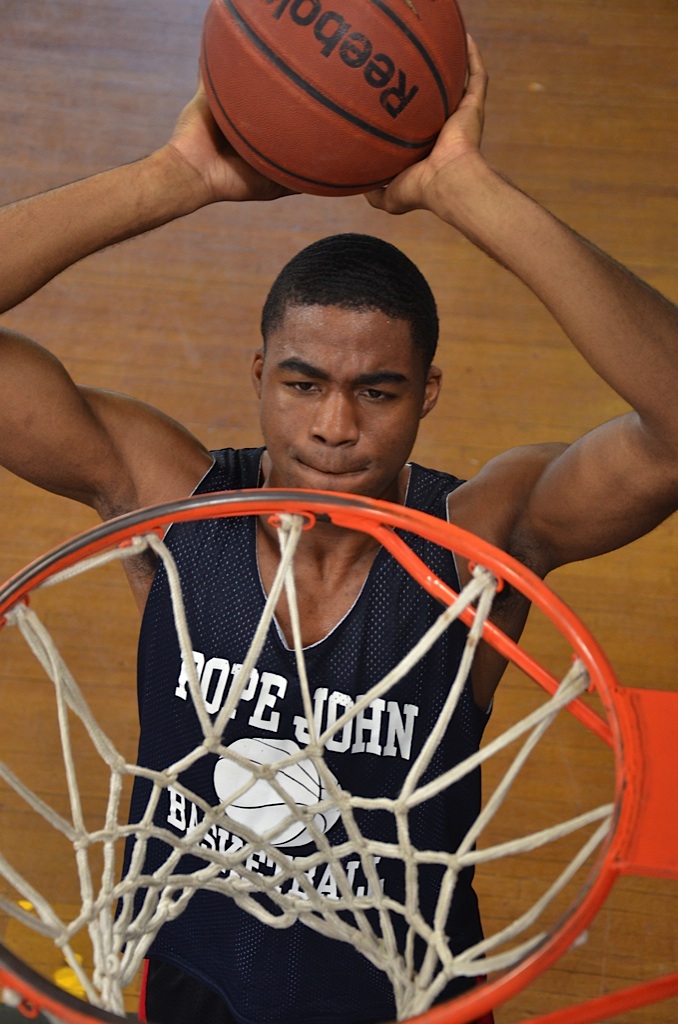 PENNINGTON, N.J. — Billy Diamond would’ve been the envy of a lot of Division 1 college coaches on Saturday afternoon. Coaching the Blue Underclassmen team in the Mary Kline Classic, Diamond fielded a starting five of Isaiah Briscoe, Tyler Ennis, Wayne Selden, Rondae Jefferson and Jermaine Lawrence. That quintet has college coaches across America drooling and they did not disappoint. But in the end, the 6-foot-10 Lawrence, a junior forward out of Pope John (N.J.), was named MVP of the Blue team after pouring in a game-high 27 points with a variety of slashes, drives and dunks in their 143-122 win.  “It’s a special time for Alex [Kline] and his family because they’re doing this for his mother who died from cancer so it’s a special moment to play here for his mother and get MVP,” Lawrence said. “This will be my first time getting an MVP in an All-Star Game so it feels real good.” Ennis, an uncommitted junior from St. Benedict’s Prep, added 24 points and Briscoe, an uncommitted freshman from St. Ben’s, tallied 17. Jaren Sina, an uncommitted junior point guard from Gill St. Bernard’s, won MVP for the Red team with eight points and 14 assists and Tyler Roberson of Roselle Catholic and DeAndre Bembry of St. Patrick scored 19 apiece. St. Pat’s junior Jared Nickens drained four 3-pointers en route to 17 points for the Red squad. But it was Lawrence who continues to be the talk of the grassroots circuit this spring. “He’s really athletic and he’s pretty tall for his position so he has potential,” Ennis said of his teammate. “I think with the right system and the right coaches he can really do well in college.” Lawrence is running with the New Rens AAU team and has college coaches across the country raving about his length, athleticism and  ability to dominate. “He’s able to do a lot of things right now,” Pope John coach Jason Hasson told SNY.tv. “He can get to the basket. He can rebound. He can catch and shoot threes. He’s very versatile right now.” Before the game, Lawrence drilled several 3-pointers during practice. He recently hit six in one AAU game. “I’ve been working on that all school year so hopefully it gets better during the summer so I can really get a consistent jump shot,” he said. Said Ennis: “With his size for his position, he can really shoot it.” Of course, as Lawrence continues to blow up, more and more attention will come his way, and more and more reporters and others will want a piece of his time. So far, so good. “He’s a very humble kid and I don’t think he’s realized how big the attention really is yet, but he’s handling it very, very well,” Hasson said. Rutgers and Cincinnati got in early on his recruitment and Lawrence will visit Rutgers for their team camp June 22-24. “I’ve been to one of their games before but I didn’t get to see the whole campus but hopefully I’ll go up there later on in the summer and check it out,” Lawrence said. Cincinnati is also deeply involved thanks to assistant coach Darren Savino, a New Jersey native. “Darren Savino really comes to a lot of games,” Lawrence said. “He talks a lot, too, over the phone.” Still, the list of schools now involved includes Kansas, Maryland, Syracuse, Florida, UConn, Villanova, Louisville, St. John’s, UCLA and UNLV. “I just really have to go visit most of the schools,” he said. “I haven’t really taken a lot of visits yet, so I just gotta go to these campuses.”

16-Year-Old Towns Could Play for Calipari in Olympics