Jeremy Lamb to the NBA

UConn sophomore guard Jeremy Lamb has decided to forego the final two seasons of his college eligibility and make himself available for the upcoming NBA Draft.

“It was a difficult decision, but after much prayer and discussion with my parents, I feel that it’s in the best interest of me and my family to declare myself eligible for the upcoming NBA Draft and pursue my dream of playing professional basketball,” Lamb said. “I have very much enjoyed my two years at UConn, especially getting to experience one of the greatest feelings that a college player can have, winning the national championship.”

While the college basketball world waits for Shabazz, Nerlens and Tony to name their college choices, another potential diamond in the rough remains uncommitted.

Bradley Hayes, a 6-foot-11 center from Jacksonville (Fla.) Sandalwood with a very high ceiling, has yet to pick a school.

“The kid can run like a deer, has soft hands and has finally embraced his size and gifts,” Todd Washington, a Hayes family friend and founder of the Puerto Rico Playmakers, told SNY.tv. “He didn’t always take basketball seriously but he is focused and prepared.”

Report: Parker Will Announce After Wednesday

Tony Parker will wait until sometime after Wednesday to announce his college choice, according to the Atlanta Journal-Constitution.

“What I’m getting from his family is that there’s a good chance it won’t be Wednesday,” Miller Grove High School coach Sharman White told the paper.

“I don’t think he’s just quite ready. He’s trying to figure out the last intricate parts of this decision … so he can make the best choice.”

This would mark at least the second time Parker pushed the decision back, since his father told SNY.tv that at one point his son was planning on announcing at the March 28 McDonald’s All-American Game. 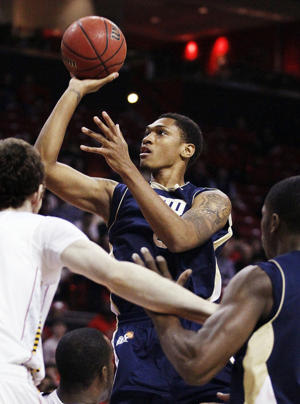 Florida International’s Dominique Ferguson declared for the NBA Draft Tuesday, saying the school would not release him after Isiah Thomas was fired as coach.

Ferguson told The Associated Press that his request to be released from his scholarship was denied by Pete Garcia, the school’s executive director of sports and entertainment. A subsequent appeal process that Ferguson said included a meeting with university President Mark Rosenberg also did not bring the release he sought.

The school had no immediate response to the AP’s request for comment.

“It’s been very confusing,” Ferguson said. “I’m getting through all this mess. It’s a big mess going on right now.”

With a little more than 48 hours to go before Shabazz Muhammad and Nerlens Noel are set to announce their college plans Wednesday night on ESPNU (7:30 EST), sources say both players remain undecided.

“It’s really tough for him,” one source said of Muhammad.

“It definitely isn’t as fun as people think,” Muhammad told ESPN.com. “It’s all you think about. It’s a tough decision.”

Norm Roberts is headed back to Kansas.

The former Florida assistant and St. John’s head coach is headed back to serve on Bill Self’s staff as a replacement for Danny Manning, who took the Tulsa job.

“I’m thrilled,” Self told the Journal-World. “We were together for nine years. My family helped raise his kids. His family has helped raise mine. We’re close. Certainly we hate to see Danny go, but Norm coming back will be a big bonus to our program.”