Catching the Dead (Furthur) at The Beacon

In the span of about a week, new Rhode Island coach Dan Hurley has put his imprimatur on the Rams.

Mike Aaman, a 6-foot-8 forward from Raritan (N.J.) High, committed to Rhode Island Saturday while on his visit. Aaman, a two-time Asbury Park Player of the Year, had previously committed to Hurley at Wagner.

The Knicks’ star then Tweeted this picture of Martin’s mother and brother, Sybrina Fulton and Jahvaris, who were in New York to do a segment with Anderson Cooper for “Anderson 360.”

“[It was] a blessing, a honor,” Anthony said after Knicks’ practice Saturday. “We all know that tragedy that happened and just to get in a different space of mind right now, bringing them to not even the game but to the locker room in the back. Meeting all the players, meeting the coaches. That was the easy part. We had no media there. It was just something that I wanted to do. 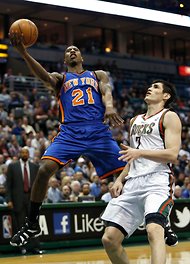 With just seven games remaining in the season, the Knicks (31-28) are tied with Philadelphia for the No. 7 spot in the Eastern Conference and could potentially face the Heat in the first round of the playoffs. Both teams remain three games back of Boston in the Atlantic Division.

“I’m looking at one thing and one thing only and that’s winning the Division,” Woodson said Saturday after practice. “I’m trying to get this team to understand that they still have a legitimate to win the Division, and that means more to me than anything.

Amar’e Plays 4-on-4, No Timetable on Return

GREENBURGH, N.Y. — Amar’e Stoudemire played 4-on-4 at the Knicks practice facility Saturday and looked fine running up and down the court.

He continued to avoid the media and left head coach Mike Woodson to speculate on when he might return to game action. Stoudemire has been out since March 24 with a bulging disc in his back and likely won’t play Sunday against the Miami Heat.

Marquette associate head coach Tony Benford was at SMU Saturday interviewing for the head coaching vacancy and former NBA and college coach Larry Brown will interview Sunday, according to sources and The Dallas Morning News.

“I’d like to coach or be involved in basketball in some capacity,” Brown told NBA TV on Saturday. “I feel like I have something to offer. I certainly would be interested in SMU.”

Benford interviewed for the job — created by the firing of Matt Doherty — for the first time during the Final four in New Orleans, sources said.

With SMU set to join the Big East in 2013, the possibility of the legendary Brown joining the league is interesting to say the least.

NEW YORK — The Knicks drafted Iman Shumpert out of Georgia Tech in large part because he is an athletic defender with size who can cover elite wings like LeBron James and Dwyane Wade.

But with the Knicks set to host the Miami Heat Sunday in a critical game for playoff positioning, Shumpert is down with a right ankle injury suffered in the third quarter of the team’s 103-65 blowout of the hapless Washington Wizards.

“They said I’m day to day,” Shumpert said as he walked out of the Knicks locker room looking fairly OK. “I think I’ll be alright.”