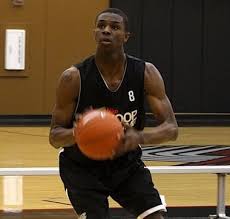 With all the talent on the floor Saturday night in the Nike Hoop Summit, it wasn’t Shabazz Muhammad, Kyle Anderson or Nerlens Noel who was the best player on the floor. No, it may well have been 6-foot-7 Canadian sophomore Andrew Wiggins, who finished with 20 points and 7 rebounds as the World Select Team beat Team USA, 84-75, at the Rose Garden in Portland, Ore. Chinese 7-footer Wang Zhelin added 19 points for the World Team in the win. “We knew they were going to come out hard,” Wiggins told Fox Sports. “We just played our game, played defense and we came out on top.” He added: “We accomplished a big goal. We wanted to beat the USA bad and we got it done.” They got it done despite a Hoop Summit record 35 points from Las Vegas Bishop Gorman wing Shabazz Muhammad, who broke the old mark of 34 set two years ago by Enes Kanter. The West Virginia Gatorade Player of the Year from Huntington (West Va.) Prep, Wiggins flashed an NBA-level jab step, a smooth stroke from beyond the arc and phenomenal athleticism in slashing to the basket. “He’s a great player,” fellow Canadian Anthony Bennett told SNY.tv of Wiggins before the game. “He’s been working on his game throughout the summer. He still has a lot more years to grow and develop his game more. “As of right now, he’s pretty nice. He’s getting a consistent jump shot and he’s attacking the rim like always. He just jumps out the gym so that’s good for rebounding and blocking shots.” As reported earlier this year by SNY.tv, Kentucky and Florida State lead for Wiggins, whose parents both attended Florida State. “I got a lot of favorite schools but those are the ones that are showing me the most love right now,” Wiggins told SNY.tv by phone before the game. He watched Kentucky win the NCAA championship Monday over Kansas and, like Muhammad, Noel and Bennett, imagined what it might be like to play there. “Yeah, great atmosphere, something I would love to be in,” Wiggins said. As for where he might fit in playing for John Calipari, Wiggins said, “It’s a fast- paced game. They have a lot of scorers on their team and I think I would be a good fit.” The NBA is getting more and more flush with Canadians, from Steve Nash to the younger generation like Tristan Thompson and Cory Joseph. Wiggins figures to be next, and his ceiling seems virtually limitless at this point. “Not only is he the best young prospect in Canada, he might be the best young prospect in the Northern hemisphere,” longtime New York recruiting analyst Tom Konchalski told SNY.tv earlier this year after Wiggins went for 19 points, 11 rebounds  and 3 assists in Huntington (West Va.) Prep’s 50-49 loss to St. Anthony in the PrimeTime Shootout. “I mean, he’s spectacular. What a combination of unforced athleticism, skill and I love his court demeanor.” FREE THROWS Muhammad will announce Wednesday for UCLA, Kentucky or Duke. “We”re gonna still really talk about that,” his father, Ron Holmes, told Fox Sports during the game. “We’re going to talk about that this week and then we’ll make a decision, so it should be interesting.”…6-9 forward Tony Parker reiterated that he would announce for either UCLA, Duke, Kansas, Ohio State or Georgia. He is expected to announce Wednesday at Lithonia (Ga.) Miller Grove High…UCLA-bound Kyle Anderson (12 points, 10 rebounds, 4 assists) lost an organized basketball game for just the second time since adidas Nations last August. He lost in the McDonald’s All-American Game last week. Anderson went 32-0 this season at St. Anthony after going 33-0 in his junior season playing for coach Bob Hurley….Team USA coach Kevin Boyle, Hurley’s longtime foil at St. Patrick, lost a tough game for the second time in eight days. A week ago Saturday, his Montverde (Fla.) Academy team blew a double-digit lead in the second half and fell to Findlay Prep in the ESPN NHSI championship game….Prior to this game, Team USA had only lost three times in 90 games in the Hoop Summit.
Photo: OregonLive.com