Calhoun, Ennis Honored as Gatorade Players of the Year 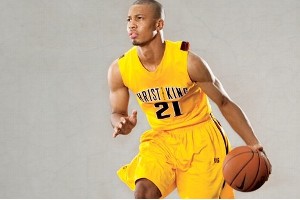 UConn signee Omar Calhoun was named the Gatorade New York Player of the Year and uncommitted junior point guard Tyler Ennis was named the New Jersey Player of the Year. A 6-foot-5 senior guard at Christ the King, Calhoun averaged 25.7 points, 8.0 rebounds, 3.0 assists and 1.2 steals this season while leading the Royals to a 19-8 record. A First Team All-State selection, he was the Catholic High School Athletic Association Player of the Year and finished his high school career as Christ the King’s all-time scoring leader with 1,770 points. Academics are a component of the award and ESPN reported that Calhoun maintains a B+ averaged.

The 6-3 Ennis has averaged 15.2 points, 7.1 assists, 4.6 rebounds and 2.5 steals through 35 games and maintains a GPA of 3.29, according to ESPN. “It’s great knowing that my play throughout the year was recognized along with the success of my team,” Ennis told SNY.tv. “I started the year worrying about the team and like I expected, winning took care of my individual goals like being [New Jersey] Player of the Year.” Ennis missed the Alhambra Catholic Invitational Tournament — where freshman teammate Isaiah Briscoe was named the Most Outstanding Player — because of a concussion but is looking forward to returning to the court next week at the ESPN National High School Invitational, where the GRay Bees (33-2) are seeded No. 4. “I’m really excited, just to prove to all the pre-season polls that didn’t show us respect along with showing that our second loss was not at full strength. “I’ve always wanted to get ESPN games and my wishes came true. Now we have to capitalize on our opportunities. The more games you win the more you play on ESPN and we want to play on ESPN as much as possible.” **For more on Ennis, watch the SNY.tv exclusive documentary here. Photos: ESPN, St. Benedict’s Prep

Nova's Wayns to Hire an Agent, Head to NBA

Report: Kidd-Gilchrist Will Enter the Draft