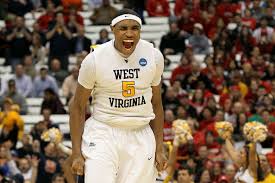 The lone unanimous selection to the All-Big East First Team,  Crowder wasn’t even among the six players named to the Preseason All-Big East Team. Crowder edged out West Virginia senior forward Kevin Jones, who was the favorite for the award for the first half of the season and finished leading the league in both scoring (20 ppg) and rebounding (11.2). Jones is just the third player in league history to lead the league in both scoring and rebounding — following Notre Dame’s Luke Harangody (2008) and Troy Murphy (2001), both of whom were named Big East Player of the Year. Big East coaches continued their trend of choosing a Player of the Year from one of the league’s top teams. Marquette has won 13 of its last 15 games, while West Virginia (19-12, 9-9) lost seven of its final 11. A year ago, Notre Dame’s Ben Hansbrough was named Player of the Year after the Irish finished second in the Big East regular season. During the 2009-10 season, Syracuse’s Wes Johnson won the award after the Orange won the regular season title. And in 2008-9, Hasheem Thabeet of UConn and DeJuan Blair of Pitt shared the award after their teams finished third and second, respectively. The 6-8 Harkless is a Queens native who was the crown jewel of head coach Steve Lavin’s highly-ranked recruiting class. Harkles was second among Big East freshmen in scoring (15.2 ppg) — behind only his teammate D’Angelo Harrison — and tied for first among rookies in rebounding (8.6). He put up 11 double-doubles and scored a season-high 32 against Providence. Harkless also had a 30-point, 13-rebound outing in a loss at Duke ”Harkless had a terrific stat-line against us,” Duke coach Mike Krzyzewski said that day. Harkless — whom ZAGSBLOG predicted would win this award in early February — was named Big East Honorable Mention, the lone freshman chosen among the three All-Big East teams or that category. In winning Rookie of the Year honors, he beat out a slew of talented newcomers, including his teammate Harrison, UConn’s Andre Drummond, the Preseason Rookie of the Year, and Notre Dame’s Jerian Grant. Harkless and St. John’s enter the Big East Tournament as the No. 12 seed and will face No. 13 Pitt at 2:30 on Tuesday. “I’m pretty sure everybody on the team is looking forward to it,” Harkless said recently. “It’s going to be a great experience and I think we could surprise a lot of people if we keep playing the way we are.”

Seton Hall, UConn, Other Big East Schools Have Work to Do; Melo Named Big East Defensive Player of the Year

Roddick Calls Fed 'The Dos Equis Guy,' Then Beats Him