Seton Hall, UConn, Other Big East Schools Have Work to Do; Melo Named Big East Defensive Player of the Year 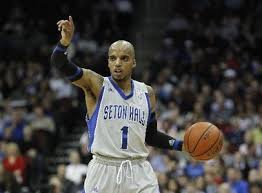 The way Jerry Palm sees it, Seton Hall is just one of several Big East programs that has some work to do this week at Madison Square Garden. The No. 10-seeded Pirates, along with No. 4 Cincinnati, No. 6 USF, No. 8 West Virginia and No. 9 UConn all need to polish up their resumes at the Big East Tournament. No. 1 Syracuse, No. 2 Marquette, No. 3 Notre Dame, No. 5 Georgetown and No. 7 Louisville are all safe. Seton Hall once held its NCAA Tournament hopes in its grasp and needed to beat Rutgers and/or DePaul to assure a .500 mark in the league. Instead, they fell at home on Senior Night to arch-rival Rutgers and then got creamed, 86-58, on Saturday at DePaul. “It’s hard to ignore, but you’ve got to let it go,” Pirates coach Kevin Willard told SNY.tv. “It’s unfortunate, it’s disappointing but at the same time we’re still playing basketball. We still have a lot of basketball. And this is a basketball team that unfortunately had two tough losses.” The Pirates (19-11) open Big East Tournament play Tuesday against No. 15 Providence (15-16). The winner gets No. 7 Louisville. “Seton Hall needs to erase the stain of the last week, so it would really help them to beat Louisville,” Palm, the owner and operator of CollegeRPI.com, told SNY.tv.  “Again, they might get in anyway, but they’ll feel a lot better if they do that.” Asked if his team needed to win two games to go dancing, Willard said, “I haven’t even thought about it. I really haven’t. We talked to the team [Sunday] and our focus is the Big East Tournament. That’s where our focus is right now, and really our main focus is Providence and getting back to playing the type of basketball we played two games ago against Georgetown.” Aside from Seton Hall, UConn — yes, defending national champion UConn — has work to do, also. Assuming the Huskies (18-12) get past No. 16 DePaul (12-18) on Tuesday, they would face a critical game against West Virginia — which is playing in its final Big East Tournament before leaving for the Big 12 — on Wednesday. “UConn-West Virginia isn’t necessarily an elimination game [assuming it happens], but the loser figures to have a nervous selection Sunday,” Palm said. UConn head coach Jim Calhoun returned to the sidelines Saturday from his back surgery and led the team to a win over Pittsburgh. Now he’s cracking jokes about what his team needs this week at the Garden.

“Somebody said, ‘It’ll be great to have you [at the Big East Tournament],” Calhoun told UConn reporters. “I said, ‘No, actually, it’d be better to have Kemba there.'” Walker, of course, led the Huskies to five wins in five days last year to capture the Big East championship and then another six wins en route to the NCAA championship. The thought of not going back to the Big Dance is not something UConn wants to entertain. “I would be really, really disappointed if we’re not in the NCAA already,” assistant coach George Blaney told reporters. “I don’t see how we’re not. “But I would always rather not leave it up to anybody in a committee room.” Cincinnati, despite being the No. 4 seed, and USF, the No. 6, also have work to do this week. Cincinnati has a double-bye and awaits whoever emerges from Georgetown’s game against the No. 12 St. John’s-No. 13 Pittsburgh survivor. South Florida, meantime, gets a single bye and then will face the No. 11 Rutgers-No. 14 Villanova winner. The winner of that second round game gets No. 3 Notre Dame in the quarters. “USF and Cincinnati are still trying to make up for poor non-conference performance,” Palm said. “Cincinnati is in better shape because of some high quality wins.  They also have a draw that makes it unlikely they’ll take another bad loss, which is probably the only thing that could really hurt them. “I’d feel better about USF if the beat the Irish.  They’re in deep trouble if they don’t even play the Irish.”  MELO NAMED BIG EAST DEFENSIVE PLAYER OF THE YEAR 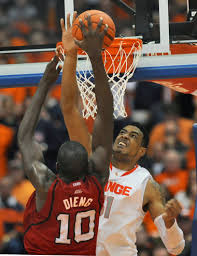 Fab Melo, Syracuse’s sophomore center, has been named Big East Defensive Player of the Year by a vote of the league’s head coaches who were not permitted to vote for their own players. The league also announced that Notre Dame junior forward Jack Cooley is the Big East Most Improved Player.  Syracuse sophomore guard Dion Waiters has won the Big East Sixth Man Award and Georgetown senior guard Jason Clark has been named the winner of the Big East Sportsmanship Award. Melo, who came to Syracuse from Sagemont, Fla., led the Big East  in blocked shots in league play with a 3.7 average.  He also averaged 6.1 rebounds.  The 7-0, 244-pound Melo is a valued member of the Syracuse lineup.  In the team’s only loss of the season, a defeat at Notre Dame, Melo did not play.  He is the second straight Defensive Player of the Year winner from Syracuse.  Rick Jackson was the 2010-11 honoree. Cooley emerged as one of the Big East’s best big men this season after making modest contributions a season ago.  As a sophomore in 2010-11, he averaged 3.7 points and 3.1 rebounds while playing 10.3 minutes per game.  This season, the 6-9 Cooley is averaging 12.5 points and owns a rebounding mark of 9.2, which ranks fourth in the Big East.  Cooley is a native of Glenview, Ill. Like his teammate Melo, Waiters has been an important ingredient to the Syracuse success.  The first player off the bench, the 6-4 Waiters is the team’s second leading scorer, averaging 11.9 points.  A native of Philadelphia, Pa., he leads the team in steals with a 1.9 average. Clark has been a steady leader throughout his Georgetown career.  He helped Georgetown to a 12-6 Big East mark this season and a No. 5 seed in The BIG EAST Championship.  Clark is averaging 14.3 points.  Off the court, Clark has worked with Hoya Dreams and Grassroots Hoyas, student-led community service organizations on campus.  He is from Arlington, Va. The Big East will announce the winners of its four remaining individual honors –Player of the Year, Rookie of the Year, OppenheimerFunds Coach of the Year and American Eagle Outfitters Scholar-Athlete of the Year – Tuesday prior to the start of the evening session of the Big East Championship.   BIG EAST Defensive Player of the Year Fab Melo, Syracuse   BIG EAST Most Improved Player Jack Cooley, Notre Dame   BIG EAST Sixth Man Award Dion Waiters, Syracuse   BIG EAST Sportsmanship Award Jason Clark, Georgetown

Fairfield's Sanders Aiming to Lead Stags to the Big Dance