Roddick Calls Fed ‘The Dos Equis Guy,’ Then Beats Him

NEW YORK — When asked to field a question about Roger Federer Monday morning during a press conference, Andy Roddick retorted, “You’re talking about the Dos Equis guy here?” Roddick was joking about the fact that Federer, the all-time leader with 16 Grand Slam singles titles, had been introduced as the second-most respected man in the world….behind Nelson Mandela. Federer laughed and conceded he didn’t get “The Most Interesting Man in the World” reference. Roddick then went out and proceeded to beat his old rival, Federer, 7-5, 7-6 (7) during Tennis Night in America at Madison Square Garden. Maria Sharapova prevailed over Caroline Wozniacki, 6-3, 6-4, in the first match. Roddick was 2-21 in his career against Federer. “I’m obviously in Roger’s head,” Roddick joked after winning in his first appearance at the Garden. “I think Jeremy Lin wanted me to win tonight,” Roddick added. Despite the loss in an exhibition, Federer is off to a strong start in 2012, having won titles indoors in Rotterdam and outdoors in Dubai, where he beat Juan Martin del Potro in the semifinals and Andy Murray in the final. “He’s been playing great,” said Roddick, 29 and the owner of one Major title from the 2003 U.S. Open. “Obviously, [he] played well in Australia but played exceedingly better in Rotterdam and Dubai and it’s amazing to see the level he’s still playing at. “A lot of the guys that we started with have kind of been done for five or six years now, so it’s been to fun to kind of play together at the same time. “It’s not surprising to see Roger winning titles.” 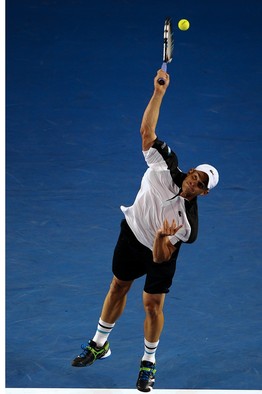 Roddick, by contrast, has fallen to No. 30 in the world. As Tom Perrotta of The Wall Street Journal pointed out, when Roddick lost to journeyman Xavier Malisse in the first round of Memphis last month, former pro Jonas Bjorkman Tweeted, “I think the end of a great career and a great fighter is coming soon.” Roddick told Perrotta he’s not done yet. “Someone two years younger, at the ranking I’m at, still gets called up-and-coming,” he said. “But for some reason people want to get rid of me.” Federer, meantime, hasn’t won a Major title since the 2010 Australian Open. He held double-match point on Novak Djokovic in last year’s U.S. Open semifinals, but succumbed to Djokovic for the second straight year there in five sets. Federer then took the first set from longtime rival Rafael Nadal in the semis of the Australian Open, only to lose in four sets. Still, because Djokovic has beaten Nadal in seven straight finals — including three straight Major finals — the Serb has slowed Nadal’s once seemingly inevitable march toward breaking Federer’s record of 16 Majors. Nadal remains stuck on 10 because he can’t beat Djokovic, who now has five. Asked if he owed a debt of gratitude to Djokovic for slowing Nadal’s roll, Federer said, “Not at all. We’re all playing and …trying to win more tournaments. “I never started this game trying to beat [Pete] Sampras’s record because obviously he didn’t have the record yet. It’s just kind of how it goes.” Djokovic has now won the last three majors — Wimbledon, the U.S. Open and the Australian Open — and Federer said it’s good for the game that the Big Four of Djokovic, Nadal, Federer and Murray are all playing well, closing out the semis of the last two Grand Slam events. “Rafa’s going last year in Australia for four straight Slams,” Federer said. “And Novak’s going for four straight Slams now and in Paris hopefully we’ll all be playing really extremely well and consistently for such a long period of time. “It really amazes me because ..we know how difficult it is. It’s just nice to see this consistency and it definitely goes all the way down to the Top 20, Top 30 rankings and it makes it difficult. It’s harder these days for youngters to come through.” The dynamic among the Big Four is fascinating. Djokovic owns Nadal. Nadal has Federer’s number. Federer beats Murray in the big matches. And Murray is coming off a win over Djokovic in Dubai. “I’s always like that,” said eight-time Major winner Ivan Lendl, now Murray’s coach. “You have guys whose game fits better against one guy and worse against another one. Speaking of how Nadal handles Federer but not Djokovic, Lendl said; “To play Rafa successfully you have to have good double-handed backhand. Single-handed guy is never going to play Rafa consistently because of the strength required to play the backhand …from his forehand crosscourt. It’s simple as that. Despite his struggles against Nadal, Federer said he remains confident that he can win another Major this year, even at the ripe old age of 30. “‘There’s no substitute for confidence,” Federer said before the exhibition. “It’s a great thing.” (The AP contributed: Photo: Getty Images)