How J.R. Smith Decided to Jump From Preps to Pros | Zagsblog
Follow @adamzagoria

How J.R. Smith Decided to Jump From Preps to Pros 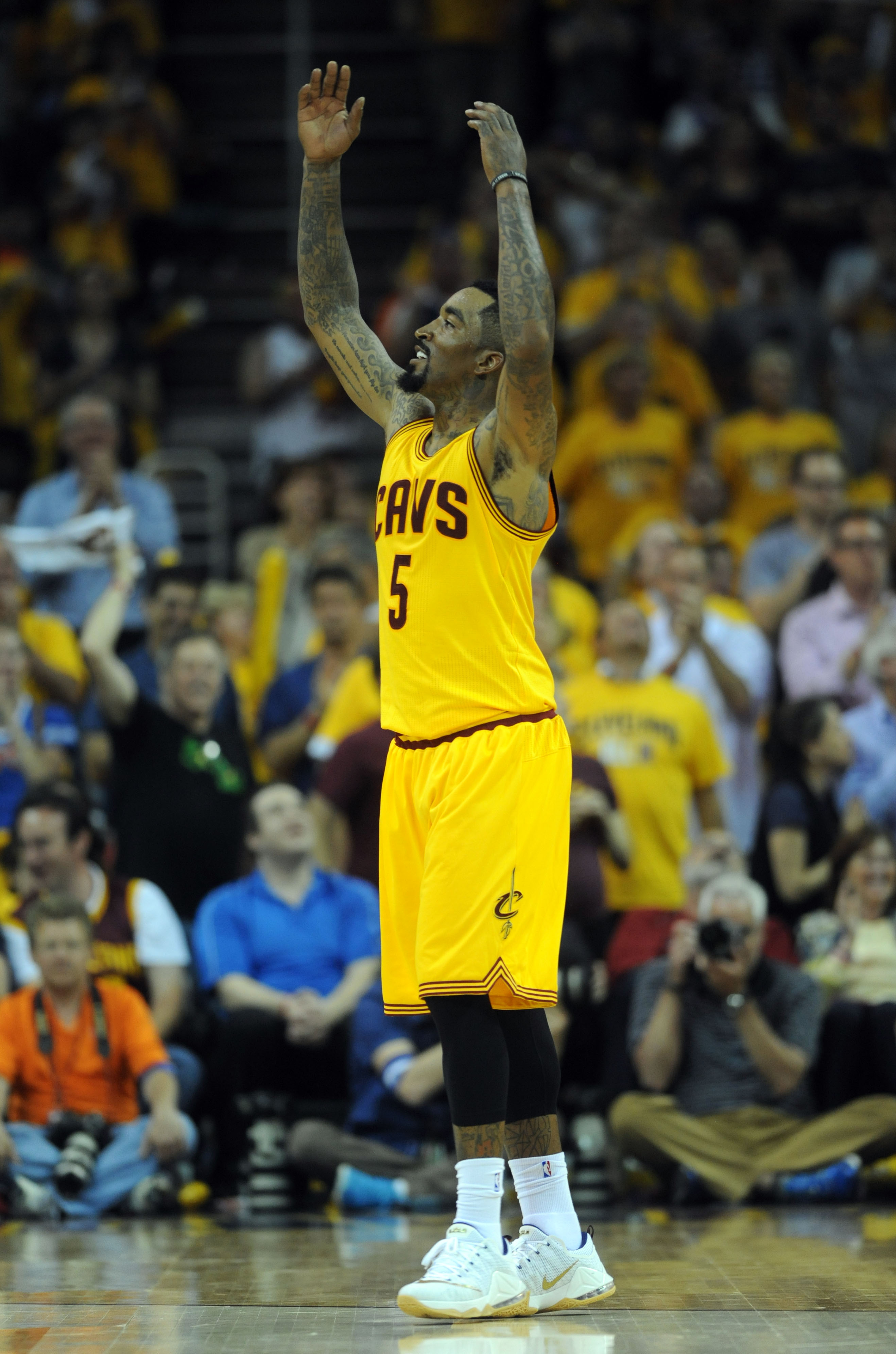 By ADAM ZAGORIA NEW YORK — Eight years ago at this time, J.R. Smith had signed with North Carolina and was still planning on enrolling there that fall and playing for head coach Roy Williams. Having chosen the Tar Heels over Louisville, Pittsburgh, N.C. State and Duke, the 6-foot-5 swingman from Lakewood, N.J., was excited about his future. “He really liked Louisville but he always dreamed of playing at Carolina,” former St. Benedict’s coach Dan Hurley, now the coach at Wagner (23-4), told SNY.tv. “He had not talked a whole lot about the NBA going into the whole year. He was excited to go to Carolina.” But by February 2004, everything began to change for Smith after he was invited to several All-Star games, including Sonny Vaccaro’s Roundball Classic and the McDonald’s All-American Game. Smith approached Hurley and said, “Coach, I want to go to the NBA. Will you work me out and get me ready for these games?” Hurley and St. Benedict’s Prep Headmaster Father Edwin J. Leahy were concerned about Smith’s academic status if he were to miss a lot of school for the All-Star games. “We said to him, ‘If you miss all these days of school you’re not going to be eligible, not goint to be able to graduate,'” Hurley recalled. “I’m going to work my hardest to take care of all my academics,” Hurley recalled Smith saying. So for the next month, Smith would meet Hurley at 6 o’clock every morning in the St. Benedict’s gym for a one-on-one workout. Then Smith would return after classes at 3:30 and work out again until 6 p.m., participating in 3-on-3s, 5-on-5s, whatever was available. “He was getting ready for the McDonald’s Game because he was determined to go to the NBA,” Hurley recalled. On March 25, 2004, Smith went 7-of-12 from the field, including two 3-pointers, to finish with 16 points and four assists to capture the East MVP award in the Roundball Classic at Chicago’s United Center. Smith came out on the losing end to a West team that featured fellow North Carolina signee Marvin Williams. “It was a great honor to get the MVP award and to play in the gym that Michael Jordan played in,” Smith told Scout.com then. “This week was a great experience, and to play with these great players was the best. I wished I could play with them all of the time.” A week later, Smith made 5 of 10 3-pointers and went off for 25 points in the McDonald’s Game in Oklahoma City as Pat Riley, Carmelo Anthony, Jay Williams and several former NBA stars looked on. He was named Co-MVP along with Dwight Howard. “At the All-American Game in Oklahoma City he was shooting from different time zones,” longtime New York recruiting expert Tom Konchalski recalled. “He got the MVP over all those guys.” Konchalski added: “He was a guy who a lot of people thought he had more of a pro game than a college game. He had a sculpted frame adorned with all these tattoos and then he shot these intergalactic 3’s. He just laughs at the NBA 3-point arc.” On April 8, 2004, Williams and Carolina assistant Steve Robinson came to Smith’s home in New Jersey to meet with Smith, his family and Hurley. Smith’s stock was sky-high and Williams had to sell him on coming to Carolina. “I was at the meeting,” Hurley said. “They talked about how he much would learn from his experience at North Carolina that would benefit him to have an even longer career in the NBA. “His draft position would be increased significantly playing at Carolina.” Williams and Robinson left the meeting uncertain what Smith would do next. “I still want to go to school, but if the opportunity [for the NBA] is there I will take it,” Smith told Jeff Goodman, then of Scout, on April 26 while at the Kingwood Classic. “I never thought I’d have this opportunity, but now I feel I have a legitimate chance and I’ve just got to weigh my options.” “I always wanted to go to North Carolina, but I’ve also always wanted to play in the NBA and the NBA is bigger.” Smith told Goodman that if he was projected to go in the top 15 picks of the NBA Draft he would declare. “He’s a ridiculous athlete,” one NBA executive told Goodman then. “Probably in the same class as Josh Smith, but I’m not sure if he’s moved quite into the top 15 yet.” By May 3, Smith had decided to enter the draft but said he wouldn’t hire an agent. “I discussed the decision many times with my parents and with my coaches,” Smith told Scout. “I felt my game had come far enough to see if I could make it into the first round.” By late May, Smith had signed with agent Arn Tellem after working out with the Lakers, Nuggets, Jazz and Clippers. On June 24, the New Orleans Hornets chose Smith No. 18 overall in the NBA Draft  at Madison Square Garden. Six prep players were taken ahead of him, including Howard with the No. 1 overall pick.

“It was the best choice for me looking back on it,” Smith said Monday night after the Knicks lost to the Nets, 100-92, at Madison Square Garden. “I learned so much on the fly and this is surprisingly my eighth year in the league. “I’ve matured so much since I’ve been an 18-year old kid coming through the high school ranks. I’m having a great time doing what I love to do and I wouldn’t want to do anything else.” Smith, who signed with the Knicks Friday over the Clippers and Lakers, said he would make the same decision out of high school if he had it to do all over again. “One hundred percent because it makes me who I am today,” he said. “I’m a mature man, a father and I get to play basketball for a living. Basketball has allowed me to do the things that I do for my family and friends and it’s great. “ Smith is now reunited with Anthony, his former Denver Nuggets teammate and the Godfather, along with Chris Paul, of his daughter.
“Melo and I are like brothers,” Smith said. “He’s my daughter’s Godfather, so it means a lot to me be on the same team as him. Coming from Denver, where we’ve come from, struggling for so many years, it feels good to get back to our roots.”
Anthon must adjust to playing with Smith and point guard Jeremy Lin, and vice versa. “I know him and I know him well and it’s going to be an adjustment period for him here,” Anthony said. “He’s just coming back from China, playing with a new basketball, a new time zone, it’s a lot to adjust to. It’s a crazy situation to have to adjust in 48 hours.” Still, for a kid who grew up in New Jersey and went straight from the preps to the pros, it’s a dream come true. “I definitely never thought I’d be here,” Smith said. “I grew up a Bulls fan all my life. I hate to say that, but this is great. Playing for the Knicks is unbelievable, they’re a first class team and a first class organization. It feels great playing in front of my home crowd, friends and family.” Hurley, eight years removed from those workouts, believes Smith has matured from his younger, troubled days and is ready to showcase it on the big stage in New York. “I always hoped that he would get drafted by a great organization, a winning organization,” Hurley said. “They have high standards and he has a chance to play with some real veteran leadership like Tyson Chandler. “It will help J.R. in terms of his understanding what it’s gonna take to be a champion, to be a championship caliber player.” Photo: AP

Jordan Theodore: 'I just want to dance so bad'