HACKENSACK, N.J. — After not playing each other for more than a decade, St. Anthony facing off against St. Benedict’s could now be an annual affair. “It’s a good game for us,” Hall of Fame St. Anthony coach Bob Hurley told SNY.tv Sunday after his team won its 40th straight game, 51-50, over St. Benedict’s at the New Year’s Jump Off at Hackensack High School. “We want to play Jersey games. I’m an old guy, I don’t want to do much traveling. “If you play in this area, you ought to be able to find a schedule where you can get 70 percent of your games. Have a Christmas tournament, maybe go to the Basketball Hall of Fame [over MLK weekend] and the SNY [Invitational Jan. 27-28].” Because St. Benedict’s is not a member of the New Jersey state athletic association, the Gray Bees could never face St. Anthony in the state tournament. 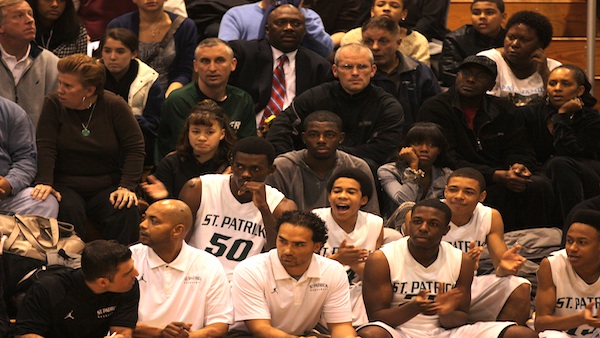 During Dan Hurley’s nine-year tenure at St. Benedict’s, the two schools never met because Chris Hurley did not want her husband facing her son. Now that Dan is coaching Wagner (he attended Sunday’s game and sat behind the St. Patrick bench in the Celtics’ loss to Teaneck), the Playaz Basketball Club was able to set up the long-awaited St. Anthony-St. Benedict’s game featuring the current top two teams in the Garden State. First-year St. Ben’s coach Mark Taylor said he’d like to keep the game going into future years. “This is about the kids,” the said. “They love this game, and it’s exciting and it’s great for both teams, the atmosphere early in the year. It gets you ready for anything you’re going to face down the road.” With former St. Patrick coach Kevin Boyle having moved on to Montverde (Fla.) Academy — and with St. Patrick having been transplanted to the South Non-Public B bracket — some of the luster has gone off the St. Anthony-St. Patrick rivalry, which for 20 years was among the fiercest in the nation. Could Taylor replace Boyle as Hurley’s chief rival? “No,” Hurley said, “because [with St. Pat’s] somebody success is the other one’s failure. Mark is in that state Prep school tournament. “We were talking before the game. It’s very hard for him with a team like this to get them to play all the time. It’s different for us because we have that state tournament coming, and these games are going to be great for us late in the season. “The teams we’re facing so far have been pretty good teams and we’re not where we’d like to be, but we’re capable of beating people right now.” Dan Hurley photo: MSG Varsity