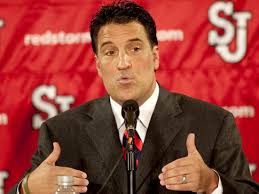 While St. John’s prepares to play Fordham Saturday at Madison Square Garden, the most important developments for the program are taking place away from New York City. Johnnies coach Steve Lavin was in Fort Meyers, Fla., at the City of Palms Classic, where he spent Friday afternoon watching Ricardo Gathers and Reserve (La.) Riverside beat 2013 point guard Jaren Sina and Gill St. Bernard’s 80-73 in double-OT.

The 6-foot-8 Gathers had 26 points and 11 boards, while Sina posted 18 points, 8 boards, 9 assists and 8 turnovers. Gathers decommitted from St. John’s amid concerns about Lavin’s health and the future of the Big East. He told Jerry Meyer of Rivals after the game he holds offers from Duke, N.C. State, Florida, LSU, St. John’s, Cal, USC and Baylor. “I want to reassure myself of where I want to be,” Gathers told Naples News after the game. “I just want to make sure I look at all my options. I wanted to re-evaluate everything.” Former St. John’s commit JaKarr Sampson, a 6-8 forward at Brewster (N.H.) Academy, is also considering St. John’s, along with Kansas, Providence, Florida and others. Lavin watched Sampson last month at the National Prep Showcase in New Haven. St. John’s will have seven recruited scholarship players with the addition of Amir Garrett. Sophomore point guard Nurideen Lindsey recently announced his plans to transfer. As first reported earlier this week by SNY.tv., the 6-7 Garrett is headed to St. John’s from Bridgton (Maine) Academy Friday, but won’t be cleared in time to suit up for Fordham. It remains unclear exactly when he will suit up. Sampson, Garrett and 6-10 Norvel Pelle were all declared academically ineligible in September. Against this backdrop, Lavin, who has been away from the team while recovering from prostate cancer surgery, plans to sign five players from the Class of 2012 in the spring signing period. The hope is that Gathers and Sampson will be among that group, since the Johnnies are woefully undermanned in the frontcourt. “Being free of cancer was the most important outcome of my treatment,” Lavin told SNY.tv by text Friday. “Now I can turn my attention to taking the necessary steps in the recovery process to regain a higher degree of stamina. In the meantime during my absence from coaching in the games I will continue moving the program forward including establishing priorities. “One of our current objectives is redoubling our efforts in recruiting the 2012 high school class. We anticipate signing five prospects. The good news is sitting in the stands at a high school practice or game to evaluate a prospect does not tax my energy levels. It was instead my premature return to the strenuous activity of game coaching that set me back in my recuperation. “I’ve found that striking a balance of attending enough of our team’s practices and yet still getting out on the recruiting trails has been the most effective use of my time and energy while making a full recovery. Using the iphone as a satellite command center for the Johnnies has provided the means to work in concert with my staff and provide direction while still away from the game coaching.” Photo: Daily News