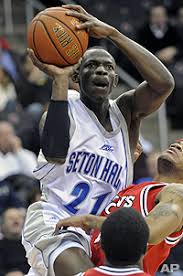 Former Seton Hall star Jeremy Hazell is in camp with the Phoenix Suns and awaiting word on his future. “He actually has a shot,” Seth Cohen, Hazell’s agent, told SNY.tv Friday. “They wanted him to focus on defense and show that he’s going to give it everything he’s got on the defensive end. “It’s gonna be tight. They have a bunch of guarantees [contracts] but he does have a shot.” The Suns play their exhibition games Tuesday and Thursday against the Denver Nuggets. In September, SNY.tv broke the news that Hazell signed a two-year deal with Lucentum Alicante in Spain after also considering offers in Italy and Israel. Hazell averaged 8.8 points in just under 15 minutes a game and shot 70 percent from the field and 40 percent from beyond the arc in Spain, but Cohen said he left the team in order to pursue his dream in the NBA. “We made a decision together that it was in our best interest to pursue Jeremy’s dream and give the NBA a shot at the Phoenix Suns camp,” Cohen said. “It it doesn’t work out we’ll return to Europe and then give it another crack next year in summer league.” Hazell scored more than 2,000 points at Seton Hall, but missed out on surpassing Terry Dehere as the program’s all-time leading scorer because he missed 13 games with a broken wrist. He was also the victim of a shooting during a robbery attempt gone bad on Christmas Day. Hazell then missed an opportunity to showcase himself at the Portsmouth Invitational in April  because his wrist was not completely healed.