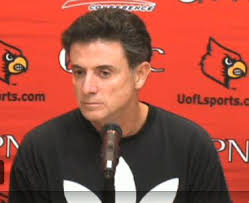 Louisville coach Rick Pitino isn’t sure if West Virginia is definitely leaving the Big East for the Big 12. But if they are, he would like to see the Big East add Temple and Memphis for basketball. “We must take Temple and Memphis into the Big East,” Pitino told SNY.tv by phone Tuesday night. “We must replace Syracuse, Pitt and West Virginia, if that’s the case, with Temple and Memphis. One Top 10 program, the other a Top 30 program that fit into everything we are all about.” Pitino said West Virginia to the Big 12 was not a done deal, despite reports to the contrary. “There’s a lot of things out there that may not necessarily be true,” he said. “I’m not sure what the landscape will be in a couple days, but I can assure you that it’s not 100 percent that West Virginia is going anywhere.” If they do go, Pitino said he believes that both Memphis and Temple could also compete in the Big East in football. “Temple has a good football program,” he said. “Memphis has a lot of money behind them and they could build up their football program. “But let’s not say what their football programs have to do. Let’s understand. We have got to become the Big East in basketball.” Notre Dame coach Mike Brey echoed similar comments in a recent interview with SNY.tv, saying he would like to see the league add Memphis, Houston and Temple for basketball. The Big East is interested in adding Houston for all sports, but has not extended invitations to Memphis or Temple. Villanova reportedly tried to block Temple from joining the Big East, but Pitino isn’t buying that. “I don’t care if you’re seven miles from Villanova, that’s irrelevant,” he said. “That’s irrelevant right now. We have got to build up basketball, build the core strong. If the core is strong, the rest of the body will be strong. “When the whole thing started, it was not football it was basketball. And we gotta get back to building the core. And it means we have to take Temple and Memphis. Memphis would be an awesome addition.” RELATED CONTENT **Pitino goes off on Syracuse, Pitt bolting Big East **Pitino: UConn to the ACC is ‘dumbest thing’ he’s ever heard

God Is on St. John's Side as Season Kicks Off