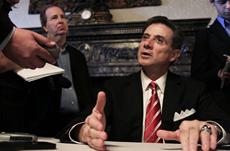 NEW YORK — Louisville coach Rick Pitino isn’t afraid to let loose his opinions on conference realignment. First he told SNY.tv during an exclusive interview that a UConn move to the ACC would be the “dumbest thing he’s ever heard of.” And at Big East Media Day Wednesday, Pitino told reporters just what he thought of Syracuse and Pittsburgh bolting the Big East for the ACC. “This was a basketball move taking Pittsburgh and Syracuse, it was not a football move,” he told reporters, according to USA Today. “They (ACC) wanted to get back to what we remember, 15-20 years ago, growing up a college basketball fan, the ACC was dominant. They don’t like the fact that the Big East has been the premier basketball conference. “My problem is not them leaving,” he said. “My problem is you did it in 48 hours. Don’t run away with a girl after one date when you’ve been dating someone else for three or four years. You’ve been dating this woman for 30 years, show a little respect.” A native New Yorker, Pitino joked that it would be hard for basketball fans to get fired up for some of the matchups in the new ACC. “Syracuse is playing Clemson tonight on TV!” he joked. “It’s not Syracuse-Georgetown. Syracuse will play Florida State tonight! N.C. State! Wake Forest!” Pitino has routinely pointed to Boston College as a school that failed by jumping to the ACC from the Big East, and he stressed that point again Wednesday. “Boston College has one of the premier ADs in the country, in my opinion,” he said. “I worked with the man at Kentucky. So you can get $2 million more by joining the ACC? Boston College, which probably has an endowment close to a $1 billion, is going to worry about $ 2 million more? How about they only had one championship since joining the ACC in 2005. “To me, I would rather win 30-40 championships and be very successful then have $2 million in my pocket. I learned that a long time ago with the Boston Celtics. I had a lot of money in my pocket, but I wasn’t happy.” He also said university president are hypocritical for thinking about money above the student-athletes. “The presidents have always said to put the athletes first,” he said. “The last thing they’ve talked about is the athletes. So there’s a bit of hypocrisy in the presidents and their answer today.” RELATED CONTENT **Marinatto says Big East will emerge ‘stronger than ever‘ **Big East invites Houston; Missouri headed to the SEC **Big East to expand; Conference USA, Mountain West to merge **Marinatto disappointed with TCU’s departure **Pac-12 slams breaks on conference realignment carousel **Paterno mentions Rutgers to the Big Ten **SEC, ACC reject West Virginia **Boeheim, Calhoun may never coach in ACC **Jamie Dixon says Pitt tried to keep Big East together **Report: Villanova applied to ACC **ACC loading up on NCAA champions **ACC approves Pitt, Syracuse; UConn, Rutgers next? **Big East to lose Pittsburgh, Syracuse to ACC (Photo courtesy USA Today)