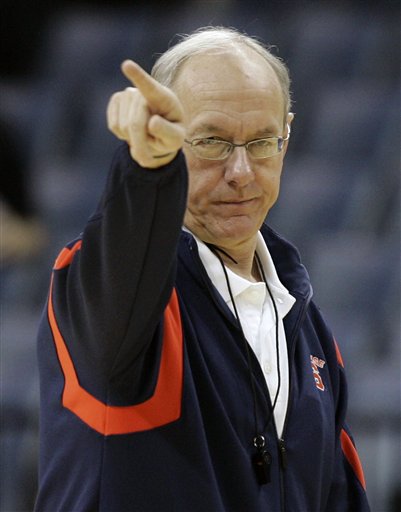 A day after Big East founder Dave Gavitt passed away at 73, the league he forged is about to lose two of its most established basketball powers. Gavitt, who founded the Big East as a seven-team league and served as its first commissioner from 1979-90, passed away Friday night in a hospital near his hometown of Rumford, R.I. after a long illness, his family told The Associated Press. On Saturday, Brett McMurphy of CBSSports.com, citing high-ranking officials from both leagues, reported that Big East basketball powers Syracuse and Pittsburgh are “likely gone” to the Atlantic Coast Conference. Both schools have applied for membership to the ACC, and could be accepted by the ACC Presidents as soon as Sunday, Gary Parrish of CBSSports.com tweeted. Florida State President Eric Barron told The Associated Press on Saturday before the Seminoles played No. 1 Oklahoma that the ACC was excited about adding to its “northern tier.” “Pittsburgh and Syracuse, who have applied, these are solid academic schools, and the ACC is a truly academic conference,” Barron said. “Certainly great basketball teams, a good history of football. “I’m sure consideration will be very fast. I’ll be surprised if it’s not tomorrow (Sunday).” The Big East’s exit fee is $5 million, but schools that wish to leave must provide 27 months’ notice. Syracuse was a founding member of the Big East, and Pittsburgh joined in 1982. “I’m not going to speculate on something that, whatever, could happen or not,” Syracuse coach Jim Boeheim, who has been in the league since Gavitt forged it, told SNY.tv by phone. Big East Commissioner John Marinatto and Pittsburgh coach Jamie Dixon were not immediately available for comment. In 2003, Miami, Boston College and Virginia Tech jolted the Big East by leaving for the ACC, which ultimately forced the Big East to spread out and add five Conference-USA schools in Louisville, Marquette, DePaul, South Florida and Cincinnati. Now, Pittsburgh, last year’s regular-season basketball champion, and Syracuse, which will likely be the preseason favorite this year, are following suit to the ACC. “Anytime you lose two Top 20 programs it’s a loss,” said one Big East basketball coach, who requested anonymity. CBSSports.com reported that the Big East has reached out to every Big 12 team except Oklahoma and Oklahoma State about potentially joining the league. That, obviously, would include Texas. “Do you just add Missouri, Kansas and Kansas State in the league and make it an interesting East/West type of thing?” the Big East coach asked. “Do you just add Temple and Central Florida now? Does the league finally split with football and basketball?” One thing’s for sure, at this critical juncture in its history, the Big East needs the kind of aggressive, stable leadership that Gavitt made famous. “Dave will be missed incredibly by me as a mentor and friend,” UConn coach Jim Calhoun said in a statement. “He was always such a big picture guy and he has done more for the sport of basketball than anyone in my lifetime. His impact on athletics in the Eastern part of the country is immeasurable and the Big East Conference, created through his vision and foresight, has taken all of us to a place that we never could have imagined. “It is especially sad, considering today is certainly one of those days, with everything in the news about our league, I would love nothing more than to call him and ask him simply, ‘what do you think and what should we do?’ “…Sadly, we cannot do that.” (The AP contributed)

Ricky Ledo Back to South Kent