Until this point, Kentucky hadn’t landed a single commit from the Class of 2012.

But that all changed late Tuesday when 6-foot-5 Arkansas shooting guard Archie Goodwin picked the Wildcats over Arkansas and Memphis.

There is a lot of movement with St. John’s once heralded recruiting class.

JaKarr Sampson, a 6-foot-8 forward, has decommitted and will re-open his recruitment.

Sampson was one of three St. John’s signees declared academically ineligible by the NCAA. He then opted to return to Brewster for a postgraduate year.

Meantime, Amir Garrett, another member of that trio, is now at Bridgton (Maine) Academy.

“I don’t know where we’re (Big Ten) going to end up,” Paterno said. “There might be even some speculation that Penn State maybe ought to get into something different or we ought to try to go out and get some people from the East to come into the Big Ten, that we maybe ought to solicit Jim Delany and some of the leaders of the Big Ten, ‘Hey, why don’t we go take a good look at Syracuse and Pitt?’

“Now that they’re out of it, ‘Why don’t we take a look at Rutgers?’ and take a look at somebody that we can bring in from the East so that the Big Ten doesn’t end in State College.”

Brett McMurphy of CBSSports.com is reporting that West Virginia has been rejected by both the ACC and the SEC. West Virginia reportedly applied to join both leagues after Syracuse and Pittsburgh jumped to the ACC over the weekend.

“Multiple Big East sources said they have been told by WVU officials that WVU rejected by ACC & SEC,” McMurphy said on Twitter.

West Virginia athletic director Oliver Luck issued a statement on Sunday about conference realignment but the Big East is not even mentioned in the statement.

“There is no question that the landscape of college athletics is once again changing,” Luck said. “West Virginia University has great tradition as the state’s flagship land-grant institution and we will continue working to do what’s best for our University and its athletic teams. No matter how the college athletic landscape changes, there is no doubt WVU is and will remain a national player.”

Meantime, the Kansas City Star reports that the SEC is interested in adding Missouri as its 14th team, but is willing to wait until the future of the Big 12 is decided.

Where Does Seton Hall Go From Here? 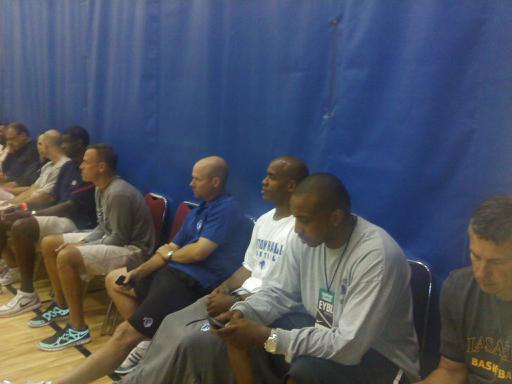 Where does Seton Hall go from here?

That is the question the Pirate coaching staff and Seton Hall fans everywhere have to be asking themselves in the wake of Kyle Anderson’s decision to go to UCLA.

“I don’t know where they go from here because they went all in and they did what they had to do,” one Division 1 head coach said. “When you miss on the kid that you must get, there’s no where to turn.

“There’s no margin for error at that level.”

Johnson said he enjoyed the visit, which included watching the football game against Ohio State.

“It was fun,” he said. “I watched the football game and then I went to go watch that fight [Mayweather-Ortiz].” If Big East Commissioner John Marinatto maintains his hardline stance about teams exiting the conference, Jim Boeheim and Jim Calhoun may never coach a single game in the ACC.

“I could see that happening,” one veteran Big East coach told SNY.tv.

Marinatto told Pete Thamel of The New York Times that he planned on holding Syracuse and Pittsburgh to their 27-month contractual exit obligation.

In case you haven’t looked at a calendar recently, 27 months from now is January 2014.