NEW YORK — In her first appearance at the U.S. Open since threatening to shove her racket down a lineswoman’s throat during the 2009 semifinals, Serena Williams laughed off the incident and said it was no big deal.

“Oh my God, that was like two years ago,” Serena, who missed last year’s Open after foot surgery, said Monday morning during a press conference. “This is like two years later.”

Asked what she remembered from the semifinal against Kim Clijsters in which Williams went ballistic after a foot-fault call, Serena added: “I just remember I lost, and that was that. I got really popular. A lot of people were telling me they thought I was super cool, that they’d never saw me so intense.

LeBron, ‘Melo & Paul to Team Up

Murray Believes He Can Win First Major in Queens

Like virtually every other tennis player of this era, Andy Murray may simply have been born at the wrong time.

The 24-year-old Scot shares an era with two of the greatest players in the history of tennis, and a third who is in the midst of one of the single greatest seasons ever.

Roger Federer and Rafael Nadal have won 22 of the last 26 Grand Slam singles tournaments, and Novak Djokovic has won three of the other four, including two during a year in which he’s compiled a 57-2 record.

During that time, Murray is 0-3 in major finals and has not won a single set. Djokovic smoked Murray in straight sets to win the Australian Open in January. 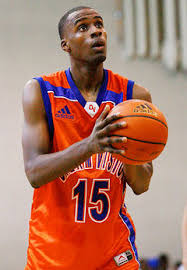 Only six of the 24 players in Saturday night’s Boost Mobile Elite 24 game have committed to college.

That makes 18 of the top players in the nation who are still on the board.

“I just think it’s because they haven’t taken officials or anything yet,” Las Vegas Bishop Gorman shooting guard Shabazz Muhammad told SNY.tv before scoring 25 points for the Raymond Lewis squad in a 142-132 loss to the Marques Johnson team.

Kyle Anderson is going to have to find some more room on his mantle.

The 6-foot-8 St. Anthony point guard picked up yet another MVP honor Saturday night after posting 18 points and eight assists to  help the Marques Johnson team cruiseto a 142-132 win over the Raymond Lewis squad in the Boost Mobile Elite 24 game in Venice Beach, Calif.

Justin Anderson of Montrose Christian (Md.), a Virginia commit who is no relation, added 23 points in the win.

Kyle Anderson, who is considering Seton Hall, St. John’s, Florida, Georgetown and UCLA and is due to announce Sept. 20, has won a slew of MVP awards this summer. He helped the Playaz Basketball Club win the Rumble in the Bronx, the Desert Duel in Arizona and the End of Summer Classic at Albright College. He also won the MVP at the recent Battle of the Boroughs in The Bronx.

Federer Says He Can Play for ‘Many More Years’

Yet Club Fed says he has no plans to go quietly into that good night.

In fact, Federer could imagine himself playing tennis for several more years.

“I’m confident I can still play for many more years to come at the highest of levels,” the 16-time major winner said Saturday at the U.S Open.

Federer is the No. 3 seed at this year’s Open and is scheduled to open against Santiago Giraldo of Colombia Monday night under the Arthur Ashe Stadium lights. He could potentially face No. 1 Novak Djokovic in the semifinals and No. 2 Rafael Nadal, his arch-rival, in the final. If he fails to win the Open, it would mark the first year since 2002 he hasn’t won at least one major.

Sources: Goodman to Decommit from Villanova

Savon Goodman will decommit from Villanova and attend another school, multiple sources with knowledge confirmed Saturday to SNY.tv.

“He is definitely looking for another school,” one source with knowledge said.

The 6-foot-6 Goodman reportedly made the announcement at the Boost Mobile Elite 24 game, set for Saturday night.

Academy of the New Church coach Kevin Givens told the Philly Inquirer several schools had already called on Goodman, who was not immediately available for comment.