As the July live period has come to an end, college staffs are huddling together to come up with a game plan on how to attack the classes of 2012, 2013, 2014 and even 2015. Here is a rundown of some of the activity from recent days.

Temple offered Terrence Samuel, a 2013 point guard from New Heights (pictured courtesy New York Post). Samuel and his teammate, Shamiek Sheppard ’13, will take an unofficial visit to Iowa State the last week of August. While both have an offer from the school, Sheppard states that he is currently favoring the Cyclones. 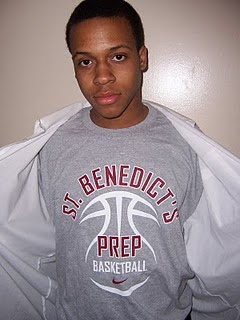 READING, Pa. — For many years, the New Jersey Playaz have been a landing spot for talented basketball players.

On Sunday, Kyle Anderson and Isaiah Briscoe, two potential NBA players, played together on the AAU circuit for the first time ever.

Ashton Gibbs began his summer thinking he might end up in the NBA.

As the summer comes to a close, the Pittsburgh guard is hoping to make the final cut for Team USA in the World University Games.

“There’s a lot of good players so it’s going to be tough making the team, but hopefully I’ll make it,” Gibbs, a Scotch Plains, N.J., native, told SNY.tv by phone from Colorado Springs, Colo.

Gibbs is one of five Big East players among the 14 finalists for the team. The official 12-member roster will be announced prior to Aug. 8, when the team departs for China.

Katin Reinhardt, a 6-foot-5 shooting guard who has been compared to Jimmer Fredette, plans to cut his list soon.

“I’m going to cut my list to five in a week or so,” Reinhardt, a rising senior from Santa Ana (Calif.) Mater Dei ranked No. 8 among shooting guards by Rivals, said by text.

After initially committing to USC on New Year’s Eve, Reinhardt changed his mind and decommitted in May.

Coaches Working Down to Wire on Kyle Anderson

Sunday was the last day of the long and brutal July recruiting period.

But there was no time for rest for the coaches in the Kyle Anderson Sweepstakes.

When Anderson scored 14 points and the Playaz emerged with a 68-67 triple-overtime victory over New Heights at 11 p.m. for the End of Summer Classic at Albright College in Reading, Pa., a few brave souls were still standing.

Of the approximately 10 coaches still in attendance were Billy Donovan of Florida, John Thompson III of Georgetown, Kevin Willard and Shaheen Holloway of Seton Hall and Rico Hines and Tony Chiles of St. John’s. (Steve Lavin was grounded in California by the loss of his wallet or he would’ve been there.).