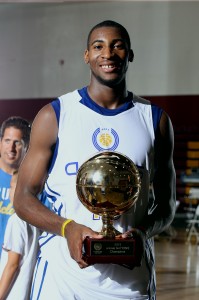 UConn must find a scholarship for Andre Drummond and is exploring several options to make room for the 6-foot-11 future pro.

One option is asking 6-9 Michael Bradley, who red-shirted last season, to give up his scholarship and perhaps accept some sort of financial aid package.

“There are several options I know the school is helping him to explore, (like) how much financial aid he would be eligible for,” Lynn Jordan, program director at the Tennessee Baptist Children’s Home, where Bradley spent most of his high school years, told David Borges of the New Haven Register. “His circumstances are a little unique, so that may open the door up for financial aid.”

Maryland announced Monday that Olexiy “Alex” Len has enrolled at the university and will be a member of the Terrapins’ squad for 2011-12.

One coach who requested anonymity called the 7-foot-1, 225-pound center from Antratsit, Ukraine a “lottery pick.”

“Best recruit in America,” the coach said. “Maryland got a lottery pick.”

“We are very excited about the addition of Alex to our basketball team,” said head coach Mark Turgeon. “To be able to add a player with his ability so late in the recruiting calendar is good for us. We’re fortunate that, prior to our arrival, Alex was being recruited to Maryland. For him to reach this point is a testament to his great family support and his character. I’m looking forward to working with Alex and helping him reach his potential as a player and a person.”

Kyle Anderson is stuck in Los Angeles until Wednesday because of Hurricane Irene-related flight cancellations and thus will not visit Georgetown on Tuesday as originally scheduled, a source with knowledge told SNY.tv.

The visit was moved to next Tuesday (Sept. 6), but the 6-foot-8 Anderson will still visit Seton Hall and St. John’s as planned Thursday and Friday, respectively.

Anderson was named co-MVP of the Boost Mobile Elite 24 game Saturday night in Venice Beach, Calif., after putting up 18 points and eights assists in the Marques Johnson team’s win.

DeMatha Catholic forward Jerami Grant is down to half a dozen schools and could pull the trigger any time now.

“I just got off the phone with his father, Harvey, and they want to make a decision here in the next week to 10 days,” DeMatha coach Mike Jones told SNY.tv. “He doesn’t want it to go past the first week of September.

Jones said Rutgers, Syracuse, Maryland, Virginia Tech, N.C. State and Oklahoma are in the mix, with Texas having “just” been removed.

Jones said the 6-foot-7 Grant is eyeing a pro career like his father and uncle Horace, and wants a college that can prepare him for that.

But he did take a shot at a story in the Wall Street Journal attributing his recent run of success to the use of a pressure chamber located in Alpine, N.J.

“Well, all I can say is that I have used it a couple of times last year, and I haven’t used it since,” Djokovic said.

“You know, it’s very interesting technology, but I don’t know the effect of it. It has nothing to do with my success that I had in last ten months.”

Djokovic is the No. 1 player in the world and has won nine titles this year, including the Australian Open and Wimbledon. He enters the Open with a 57-2 record.

The Journal story said that since last year’s Open, where Djokovic lost to Rafael Nadal in the final, he “has been trying to improve his fitness by climbing into a rare $75,000 egg-shaped, bobsled-sized pressure chamber” made by a California-based company called CVAC systems.

Brandon Ashley is off the board.

The 6-foot-7 forward from Findlay Prep verbally pledged to Arizona Monday, following a weekend visit there. He will join Oakland Soldiers teammates Josiah Turner and Nick Johnson with the Wildcats.

The Rivals No. 5 power forward in the Class of 2012 chose the Wildcats over UCLA, Kentucky and Oregon. He joins shooting guard Gabe York and power forward Grant Jerrett — both fellow California natives — in Arizona’s 2012 recruiting class. 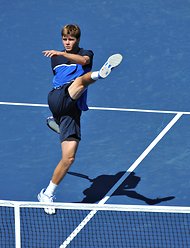 NEW YORK — Martina Navratilova called him “a little bit lazy” and “passive” with regard to his shot selection.

Mats Wilander called him “too cautious.”

In the end, Ryan Harrison couldn’t disagree with the commentators calling the match for the Tennis Channel.

“It’s true because I wasn’t feeling good,” the 19-year-old Louisiana native said after his 6-2, 7-5, 7-6 (6) loss to No. 27 Marin Cilic in a first-round U.S. Open match in Louis Armstrong Stadium. “So you’re passive and you’re playing defensively and behind the baseline whenever you’re not feeling good.”