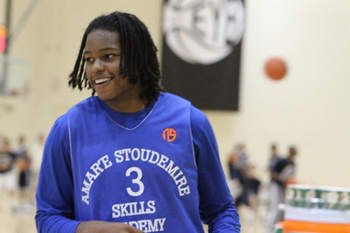 And in fact, he is one, playing defensive end and tight end at Decatur (Ga.) Southwest DeKalb High.

But this summer Goodwin’s stock in basketball has risen dramatically as he helped the Memphis YOMCA AAU team reach the finals of the prestigious Peach Jam event with a 29-point, 12-rebound performance in the semifinals against the Georgia Stars.

After leading St. Patrick High School to national prominence over the past two decades, Kevin Boyle has no intention of slowing down at his new home.

Boyle, who shocked many in the basketball world by leaving St. Pat’s for Montverde (Fla.) Academy in April, told SNY.tv that 6-foot-11, 263-pound center Dakari Johnson is coming to Montverde.

“He’s enrolled at the school,” Boyle said by phone.

Indiana Pacers guard Lance Stephenson will play in either China or Italy during the NBA lockout, according to his agent.

“We’re working on a couple things and we’ve narrowed it down to Italy and China for now,” Alberto Ebanks told SNY.tv by phone. “He’s excited about just getting a run going while the lockout is in place. I think it’s important to stay in basketball shape so he’s about to bust a move.”

St. John’s already has a verbal pledge from 2012 point guard Jevon Thomas and is in the Kyle Anderson Sweepstakes, too.

But that didn’t stop the Johnnies from offering 2013 Philly floor general Rysheed Jordan.

A source close to the staff said St. John’s was “very high on his game.”

Brandon Ashley, one of the top players in the Class of 2012, has cut his list and announced his plans for a change of scenery next season.

“Those are the schools that recruited me the hardest and longest since Day 1,” Ashley, the No. 5 power forward in the Class of 2012, said according to MaxPreps.com. “It’s definitely nice to be wanted. Those are the people you develop the strongest relationships with.”

The first 12 players selected to participate in the sixth annual Boost Mobile Elite 24 event have been announced.

Players are selected based on their performance during AAU tournaments and national summer camps. The 2011 Boost Mobile Elite 24 will be held at the Venice Beach Courts in Los Angeles on Aug. 26-27.

He had taken a piece of paper, written “Brooks” on it in black marker and covered up the “Yi” on the back of  his No. 9 Nets jersey.

Yi Jianlian is with the Washington Wizards and is no longer wearing No. 9 for the Nets. Brooks is.