Myles Davis Could Announce This Week 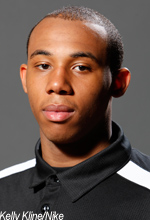 If the Playaz Basketball Club reaches the finals of the Nike Peach Jam here (7 p.m. Friday), Davis plans to announce on ESPNU.

“If not I’m going to wait until the end of the month.”

Asked if he had already made up his mind, Davis said, “I’m almost there.”

Davis, who left Plainfield High School before last season for Notre Dame Prep, is down to Xavier, Georgetown, Pittsburgh and West Virginia.