Lance Stephenson is in trouble again.

At 5:05 Sunday morning Coney Island police responded to an assault charge at 621 Avenue Z, according to the police report. Upon the arrival of police, they discovered Stephenson’s girlfriend, Jasmine Williams, who stated that her boyfriend, the 19-year-old rookie guard with the Indiana Pacers, pushed her down a flight of stairs, striking her head against the wall. She was transported to Lutheran Hospital in stable condition.

Stephenson, the No. 40 pick in this year’s NBA Draft, was taken into custody at the scene and charged with assault, attempted assault, harassment, menacing and criminal possession of a weapon.

Asked where he was on Sunday night, a NYPD spokesman said, “He’s down in Brooklyn court.”

Kadeem Jack Has a Top Four

Kadeem Jack has a top four and 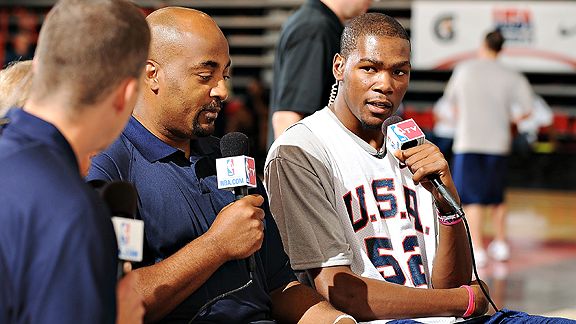 Green and JaVale McGee were cut Sunday as the roster was whittled to 13 players and Durant tried his best to support his friend.

“That’s always tough, man,” said Durant, who had 14 points and eight rebounds in an 86-55 victory before a sellout Madison Square Garden crowd of 19,763 that included Tony Parker, Eva Longoria and John Wall.

With the departure of the 7-foot McGee, the 7-1 Chandler remains the only 7-footer on the roster.

New Rutgers coach Mike Rice may have a limited roster for his first season at the Big East school.

But he’s got to feel good about how some of his guys are playing this summer.

Rutgers senior forward Jonathan Mitchell (pictured courtesy ScarletKnights.com) posted his third double-double in as many games with 18 points and 16 rebounds to help the Eastern All-Stars to a 123-91 victory over the Y Cares Wreckers Friday evening at Kendal Isaac Gymnasium.

Rutgers sophomore Dane Miller, who has been playing both the point guard and wing positions for the All-Stars, added 24 points, seven rebounds and four assists in helping the team to a 3-0 record.

Anthony Davis finally made it official.

The 6-foot-10 forward from Chicago Perspectives announced his decision to attend Kentucky in 2011, joining a blockbuster class that includes Michael Gilchrist of Elizabeth (N.J.) St. Patrick and Marquis Teague of Indianapolis Pike.

Davis initially cut his list to Kentucky, Syracuse and Ohio State before also taking a visit to DePaul.

John Calipari now gets three of the top eight prospects in the Class of 2011.

“Coach Calipari is easy to talk to and he listens to what you are saying,” Davis told ESPN recruiting writer Paul Biancardi on Friday. “[Calipari] will be a father figure to me away from home. He’s a demanding coach that will not tell me what I want to hear, but what I need to hear to improve.”

Kentucky’s three-year run of recruits is unprecedented in recent history.