If Anthony Davis has indeed decided to play college ball at Kentucky, he hasn’t told anyone at Syracuse or Ohio State.

Both schools haven’t heard from Davis regarding his decision and still believe they have a chance, multiple sources with knowledge said Tuesday.

The 6-foot-10 Davis out of Chicago Perspectives Charter initially cut his list to Kentucky, Syracuse and Ohio State before taking a recent visit to DePaul.

Anthony Davis Sr. has threatened a lawsuit against the Chicago Sun-Times for printing that he asked Kentucky for a six-figure payment in return for his son’s commitment, despite providing no evidence to corroborate the charge.

The Sun-Times and other outlets also cited “sources” saying Davis had decided to attend Kentucky.

If Davis does land at Kentucky, he would join a blockbuster recruiting class that already includes two of the top five players in the Class of 2011 — 6-6 wing Michael Gilchrist of Elizabeth (N.J.) St. Patrick and 6-2 point guard Marquis Teague of Indianapolis Pike.

The Top 3 players in the Rivals

Corey Fisher reportedly went out and put up 105 points in a summer league game Saturday night, prompting the question: Who was guarding Corey Fisher?

According to reports, Fisher made 23 of 28 3-pointers — missing only five — and scored 72 points in the second half of the 40-minute game in the Watson Classic in the Bronx.

Some cat named Jose Calderon from Spanish Harlem — not the NBA — was primarily guarding him, but Fisher reportedly faced multiple double- and triple-teams.

The following players were selected as part of a New York City All-Star team that will travel to Turkey Aug. 28-Sept. 3 to play other youth national teams in conjunction with the FIBA World Championship.

All of the players will also compete this weekend in the Battle of the Boroughs and then play a Chinese youth team on Friday night at Rucker Park. 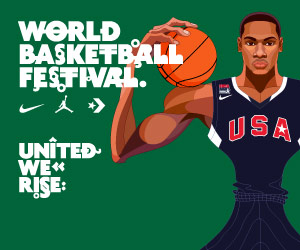 If you’re a hoops junkie, there’s no better place to be this week than New York City.

The World Basketball Festival whips through the Big Apple with a slew of events.

As I see it, there are basically two main components. The first involves Team USA, which begins practices Tuesday leading up to Sunday’s exhibition against France at Madison Square Garden. (Practices are not open to the public.)

The Americans then leave for exhibition games against Lithuania (Aug. 21), Spain (Aug. 22) and Greece (Aug. 25) in Madrid and Athens before the start of the FIBA World Championships Aug. 26 in Istanbul, Turkey.