What makes Bruce Beck stand out in

Tommie Patterson can speak firsthand about the ability of new Rutgers coach Mike Rice to unearth rare recruiting gems in the Garden State.

During the 2007-08 basketball season, when he was an assistant coach at Paterson (N.J.) Eastside High School, Patterson tried to interest several Division I teams in a diminutive, yet explosive combo guard named Karon Abraham.

“Karon had a couple of low D-2 schools [interested] and a couple guys thought that he was just too small to play at the Division I level,” recalled Patterson, now the head coach at Clifton (N.J.) High School. “I called FDU [Fairleigh Dickinson University]…and they pretty much gave us the cold shoulder and said that he couldn’t play at that level because of his size.

Read the full story at SNY.

Mike Rice will be the next head

When the two schools square off in the rematch Dec. 4 at the Izod Center in East Rutherford, N.J., Irving will play the point for the Blue Devils.

“It’s probably the best game next year because it’s a rematch of the title game,” the  6-foot-2 Irving, a McDonald’s All-American and co-MVP of the Jordan Brand Classic out of Elizabeth (N.J.) St. Patrick High School, wrote by text.

The Blue Devils won their fourth NCAA title in Indianapolis on April 5 by beating the hometown favorite Bulldogs 61-59, as Gordon Hayward’s potential winning shot from halfcourt bounced off the rim. 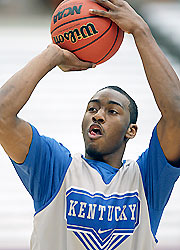 John Wall, the projected No. 1 pick in next month’s NBA Draft, has signed with agent Dan Fegan of Blue Entertainment Sports Television, according to multiple reports.

The 6-foot-4 Wall is seen as a transcendent personality who can captivate fans and also sell a variety of products, including sneakers. BEST will collaborate with another firm to handle Wall’s marketing rights.

Adrian Wojnarowksi of  Yahoo! Sports reported that LeBron James’ fledgling marketing company, LRMR, was in talks to bring Wall aboard, but DraftExpress.com said LRMR will not be BEST’s collaborative partner.