Shabazz Muhammad, a 6-foot-5 shooting guard from Bishop Gorman in Nevada, has picked up another offer. This one is from the national champion Duke Blue Devils. Muhammad, who reclassified from the 2011 class into 2012, is ranked 8th in the country in that class by Rivals.com.

About a week ago, the sophomore predicted Duke would offer him soon. As of now, his offers include “Arizona, Arizona State, Duke, Louisville, Kansas, Kentucky, USC, Texas, and Memphis.”

**UPDATE: Muhammad expects to get a formal offer from North Carolina in mid-June, per sources.

Daniel Ochefu is piling up the high-major offers.

Rutgers became the latest Division I school to offer the 6-foot-10, 235-pound Class of 2012 forward/center out of The Westtown (Pa.) School.

“I like Georgetown and Kentucky a lot but I’m sure there will be more offers at the end of the summer,” Ochefu told ZAGSBLOG contributor Alex Kline.

Ochefu said he has no visits planned yet but will set some up soon.

In other Kentucky news, head coach John Calipari revealed on his Website that his mother, Donna, is battling cancer and that he would need to focus on her for the near future.

If you’re a college coach seeking a 6-foot-10, 215-pound  Big East-level forward at this late date, you should know about Walter Pitchford.

Pitchford, out of Richmond (Ind.) New Creations Basketball Academy, has asked to be released from his Letter of Intent to DePaul but hasn’t received it yet.

“I’m still waiting,” Pitchford, a Grand Rapids, Mich., native, said Friday by phone. “The longest I have to wait is around nine [more] days until I can get my release fully. It could be sooner than that.”

Pitchford and his father, Walter Sr., said they were told by DePaul officials that he would receive his release within 30 days of when he first asked for it. The father mentioned June 10 as the end of the 30-day period.

Will Bledsoe Investigation Send Cal to the NBA? 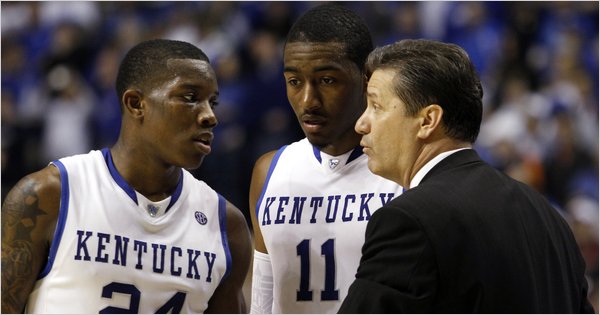 “Obviously, if something’s going to go down at Kentucky, that would be the third school [that Calipari’s impacted].

“I would think that that would expedite something.”