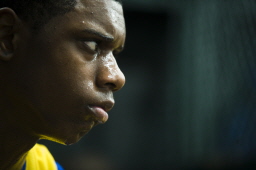 Nearly a week after he verbally committed to the University of Washington and put on a Huskies cap at a press conference, Terrence Jones‘ has still not signed his Letter of Intent and his future is still in flux.

“I think when he walked into the gym, he still didn’t know [where he would go to college],” Portland (Ore.) Jefferson coach Pat Strickland told Nick Dashel of The Oregonian. “He told me [Saturday] he wasn’t ready to make his decision, but I still think Washington is the front-runner.”

The 6-foot-8 Jones watched as teammate Terrence Ross, a 6-5 small forward, made his announcement for Washington after quietly signing a Letter of Intent days before. Alex Kline reported the Ross commitment April 26 on ZAGSBLOG.

Here's Part 2 of my interview with

With five of his players headed to the NBA, could Kentucky coach John Calipari be following suit?

Adrian Wojnarowski of Yahoo! Sports reported that Calipari has interest in the Chicago Bulls vacancy created by Monday’s firing of Vinny Del Negro.

Yet Calipari denied interest, posting on his Facebook page: “Every year you will hear my named mentioned for NBA jobs because I coached in the league before. I’m very happy at Kentucky.”

He also told ESPN’s Andy Katz that he had no interest in the job.

Here's Part 1 of my interview with

Kadeem Jack is headed to South Kent, a prep school in Connecticut, for a year before going on to college.

“I spoke to Kadeem Jack last [Monday] night and he gave me every indication that he will be attending South Kent next year,” South Kent coach Kelvin Jefferson said Tuesday.

“Felt like I needed 2 get my skills and my body and my confidence up so when I go into college I can make a much bigger impact,” Jack told Bruce Pascoe of the Arizona Daily Star.