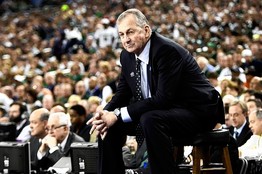 UConn is holding a press conference at 10 a.m. on Friday to announce an update to the NCAA investigation of its men’s basketball program. What the press release from UConn announcing the presser did not mention — and what The Hartford Courant first reported — is that assistant coach Pat Sellers and director of basketball operations Beau Archibald have resigned from the staff in the wake of the investigation. Sellers did not immediately respond to a text message and a voicemail seeking comment. A year ago, Yahoo! Sports chronicled NCAA violations which occurred during UConn’s pursuit of recruit Nate Miles. The Tampa Tribune later reported that Josh Nochimson, a former UConn student manager who became a sports agent, paid several thousand dollars for Miles to have surgery in December 2007. “Could I have made a mistake? Sure.” UConn head coach Jim Calhoun told Yahoo! Sports during the 2009 NCAA tournament. “The [rules] manual is 508 pages. Someone could’ve made a mistake.” In attendance at the press conference will be Calhoun, Director of Athletics Jeffrey A. Hathaway and Rick Evrard, the University’s outside counsel for NCAA-related matters. SKERRY LEAVES PROVIDENCE FOR PITT

Jamie Dixon didn’t have to look outside the Big East to replace departed assistant Tom Herrion, who got the head job at Marshall. The Pittsburgh head coach hired Providence assistant Pat Skerry away from the Rhode Island school to join his staff. “I appreciate the opportunity to have had Pat work with us the last two seasons,” Providence coach Keno Davis said in a statement. “As a head coach you always have to be prepared if a staff member leaves. We feel we are well positioned to improve our staff in the coming weeks. It became evident that our coaching staff has made great progress here at Providence. We have an excellent recruiting class coming in and our staff has worked very hard to improve the talent level.” Skerry is one of the top recruiters in the Big East and helped bring in freshman point guard Vincent Council of Brooklyn as well as incoming 6-4 shooting guard Gerard Coleman of The Tilton (N.H.) School. Skerry also recruited junior point guard Naadir Tharpe of Brewster (N.H.) Academy. “I have not had an opportunity to speak with Naadir about it,” Brewster coach Jason Smith wrote by text. “We are in final exams. The prom is tonight [Thursday] and graduation is Saturday morning.” Providence recently lost its top returning scorer, Jamine “Greedy” Peterson of Brooklyn, when he was removed from the team for a violation of team rules. Peterson’s dismissal followed the arrests of teammates Johnnie Lacy and James Still, who were charged with assault and were suspended pending an investigation. Lacy already said he would transfer. FREE THROWS Rice associate coach Louis Reynaud is in the mix to join Oregon’s staff as an assistant, sources said. Follow Adam Zagoria on Twitter