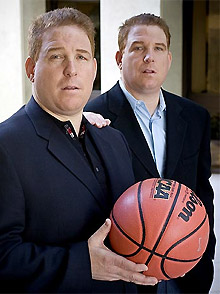 There were some big stories in the college and prep hoops world in the last 24 hours… **Yahoo! Sports broke the news of the Kansas ticket scandal that has everyone in college hoops talking. Kansas announced that six university employees engaged in a scam that sold off more than $1 million in basketball and football tickets over the past five years. The story indicates college power brokers Dana and David Pump (pictured) orchestrated the scam and have made hundreds of thousands of dollars in ticket scams at the 2002 and ’03 NCAA tournaments. This is the latest black eye for a Kansas program that last year made news when members of the basketball and football teams got into fights with one another on campus.

**Former Oregon assistant and Louisville player Kenny Payne is leaving the Ducks to join John Calipari’s staff at Kentucky. “Kentucky is Kentucky,” Payne, 43, told The Register-Guard. “It’s one of the most prestigious programs in the history of college basketball and it’s an honor for them to even look at me.” Payne won an NCAA championship at Louisville in 1986. He earns a reported $300,000 base salary with incentives that could raise his income to $469,000. The Payne move follows a reorganization at Kentucky that saw former assistant Rod Strickland, the onetime Knicks point guard, get demoted to an operations spot after getting charged with a DUI. Kentucky had no official comment and Calipari didn’t Tweet about it. **In an effort to save money in tough financial times, New Jersey may do away with the Tournament of Champions, The Star-Ledger reports. The TOC features the six winners of state group championships in a single-elimination event that determines one overall state champion. St. Anthony, led by Hall of Famer Bob Hurley, has won nine TOC’s and St. Patrick, coached by Kevin Boyle, has won five, including three of the last five.

**Maurice Harkless, a 6-6 junior small forward from Forest Hills (Queens) High who has committed to UConn, will prep next year at South Kent (Conn.). “South Kent School in Connecticut is where I will be in September,” Harkless, who averaged 17 points and 12 rebounds last season, told ZAGSBLOG contributor Alex Kline.
“I feel like it’s the better opportunity for me to get ready for college,” he added. “I chose a boarding school like South Kent because it’s basically run like a college. The coach is real cool and I hear his practices are ran like a college practice. I enjoyed my time at Forest Hills but I feel like this is what is best for me.”
The story was first reported by the New York Post.
Harkless could team with current Rice High School forward Kadeem Jack, who has said he will prep at South Kent instead of going to college next season. South Kent, coached by Kelvin Jefferson, has become a new home for many New York-area players in recent years, including Omari Lawrence, Kevin Parrom (Arizona), Russell Smith (Louisville) and J.J. Moore (Pittsburgh).
“A lot of kids do leave nowadays, it just happens to be a trend,” Forest Hills coach Ben Chobhaphand said. “I know he will be successful at UConn and for the three years he was at Forest Hills he learned and matured into the player he is now. He helped us and himself be successful at Forest Hills. But we wouldn’t be a program if it is just stops with him. We will continue to produce Division 1 players.”
Said Jefferson: “I am very excited to have a chance to coach a player with Maurice’s abilities. Maurice is the epitome of a student-athlete. He is an honor student in the classroom and he has a tremendous scoring package on the court. He is a welcome addition to the South Kent family.” **The Great Alaska Shootout schedule is out, and St. John’s will open play against Ball State Nov. 24. (Photos courtesy Yahoo! Sports, Louisville Courier-Journal & Rivals) Follow Adam Zagoria on Twitter

Remi Barry to Decide in June