As we hurtle toward Selection Sunday at 6 p.m. on CBS, some of the most interesting developments of the night around the metropolitan area could come after 9 o’clock tonight. Seton Hall coach Bobby Gonzalez is slated to hold a conference call with reporters at 9 p.m. (assuming the Pirates are chosen for the NIT and not the NCAA). And embattled St. John’s coach Norm Roberts is on for a 9:30 conference call. What these two coaches say is sure to be interesting. Will Gonzo rail against the NCAA Selection Committee if the Pirates aren’t selected? Will he embrace the NIT as a viable option for his team even though he stated before the season began that the NCAA was Seton Hall’s ultimate goal? And what about Roberts? The New York Post on Thursday reported that Roberts would be fired after the season, but three days later there has been no official word from the school. The official position is that St. John’s is still NIT eligible and thus the season is not officially over. If the Johnnies make the NIT and make a run, can Roberts save his job? If they don’t, will an announcement be forthcoming in the next day or two? And what will Roberts say about it all Sunday night? Neither Rutgers nor St. John’s made a coaching change during the Big East tournament and while there is no official league rule against doing so, one conference official admitted it would be “awkward” if a change were made. Now we can only wait and see whether St. John’s AD Chris Monasch or Rutgers AD Tim Pernetti pulls the trigger in the coming hours or days. WAGNER COACHING SEARCH Over at Wagner, we hear that former Indiana assistant and St. Anthony product Roshown McLeod has put his name in the mix for the coaching vacancy and is highly interested in getting the job. Other possible options include NJIT coach Jim Engles, Rutgers assistant Darren Savino, Seton Hall assistant Scott Adubato and St. Benedict’s coach Dan Hurley. I’m told it’s only a one-year contract no matter who gets the gig, so there isn’t a whole lot of job security. SAINTS ALL GONE 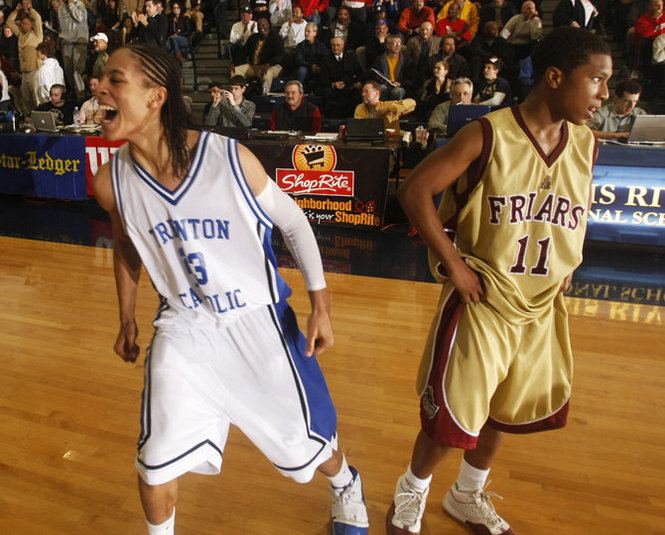 If you had told me before the high school season began that the New Jersey Tournament of Champions would NOT include St. Patrick, St. Anthony or Paterson Catholic, I would’ve asked what you were smoking. St. Patrick was felled by the NJSIAA and the legal system. Paterson Catholic was felled by St. Anthony. And St. Anthony was felled Saturday by Trenton Catholic, 57-56, in triple-OT in the Non-Public B state title game. Frantz Massenat had 25 points, Khalid Lewis (pictured) scored 15 and Dondre Whitmore had 12 as TC won the school’s first state title since 1990, when it was known as McCorristin. “To be honest, I cried when this happened,’’ Massenat told The Star-Ledger. “Since my freshman summer I’ve been working for this. It’s so great that it happened in my senior year.” Led by legendary coach Bob Hurley, St. Anthony had been the underdog against Paterson Catholic on Thursday night at Rutgers, but was the favorite in this game to win its 26th state championship. With St. Pat’s, St. Anthony and PC now out you have to think St. John’s commit Ronald Roberts and St. Peter’s Prep remain the favorites, assuming they win the Non-Public A title game Sunday night. St. Benedict’s Prep is not a member of the NJSIAA, but the kids there looked forward to the ESPN Rise National High School Invitational. But on Thursday we broke the news that Father Edwin Leahy, the school’s headmaster, told the players they wouldn’t compete in the event because it overlaps with Good Friday. Both St. Ben’s and St. Pat’s are among the Top 10 teams in the nation, yet neither will play in the postseason. Amazing. Adults make the decisions but mostly I feel bad for the kids. (Photo courtesy Ed Murray / Star-Ledger) Follow Adam Zagoria on Twitter