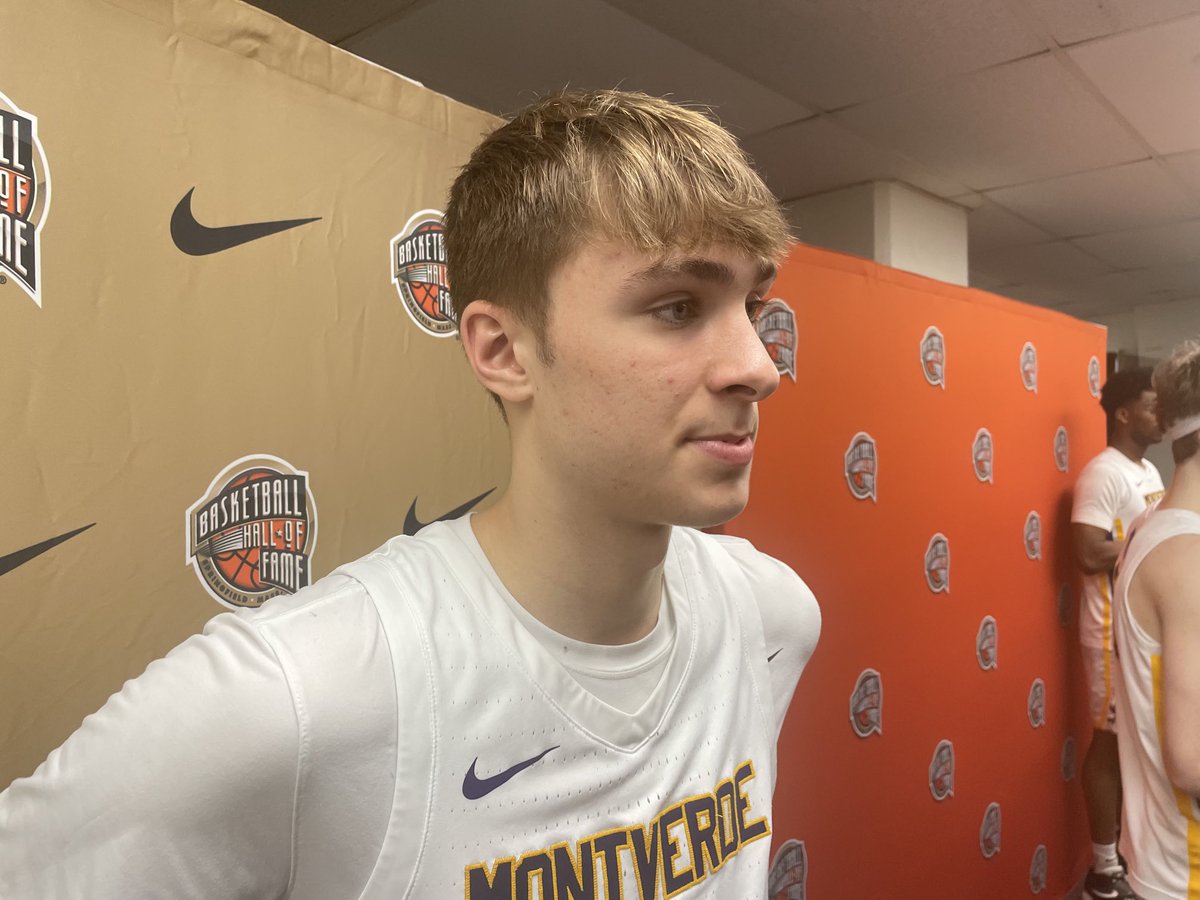 By ADAM ZAGORIA SPRINGFIELD, Mass. — Cooper Flagg continued to make his case as arguably the No. 1 prospect in high school basketball, while reiterating that Duke is his “dream school.” Playing in front of more than 30 credentialed NBA scouts at the Hoophall Classic on Saturday, the 6-foot-8 16-year-old sophomore forward filled the stat sheet with 21 points, 5 steals, 5 rebounds and 3 assists in Montverde (FL) Academy’s 85-63 victory over La Lumiere (IN). His performance came with about 100 family and friends from Maine in the stands after they made the trip to the Hall of Fame. During one stretch in the second half, Flagg displayed his all-court game by draining a corner 3-pointer, leaping to flush a two-handed dunk and then making an entry pass to teammate Liam McNeeley for a layup. “Obviously, it’s a great feeling to know that I get to represent Maine in such a good way so I’m trying to help our team win in any way that I can,” Flagg said.

Cooper Flagg started off the HoopHall Classic with a bang, scoring 14 points in 16 first half minutes. Stroke is looking clean. Just turned 16 three weeks ago. Looks like he's grown from the summer. Arguably the No. 1 prospect in high school basketball. pic.twitter.com/TMzPdFEOWn

Upon receiving an offer from Duke coach Jon Scheyer last May, Flagg referred to Duke as his “dream school.” Duke has been linked to Flagg for some time, in part because his mother, Kelly, played college basketball at Maine where she was a team captain as a senior. Kelly (and the mother of UConn freshman big man Donovan Clingan) played at Maine for coach Joanne P. McCallie, who coached at Duke from 2007-20, and Kelly remains friendly with Duke coach Jon Scheyer. “Dream school obviously but there’s still so many more options that I want to look into and everything like that,” Cooper Flagg said Saturday of Duke. Asked about those options, he said, “I’m not exactly sure but there are plenty of options I want to look into.” Asked how much contact he’s had with Duke, he said, “Obviously, I haven’t been able to contact coach Scheyer yet. I have been able to talk to him a little bit and stuff that.” College coaches cannot contact recruits directly until after their sophomore season. He also holds offers from Michigan, UCLA and West Virginia, among others, but said he has no visits planned for now. “Not really,” he said, “Right now I’m just taking it one day at a time.” As for what he’s looking for in a school, Flagg said, “Probably just the culture of the school, the support and everything.” In December, Flagg was named the USA Basketball Male Athlete of the Year after averaging 9.3 points and 10 rebounds while leading the U.S. to the U17 World Cup gold medal as the youngest member of the team. If the NBA one-and-done rule changes before Cooper graduates high school in 2025, he could opt to go straight to the pros and forego college. He certainly impressed the scouts on Saturday. “Flagg is arguably one of the best, if not the best, high school prospect that has come up through the ranks over the past 10 years, with his age in mind,” one NBA scout in attendance said. “Not sure I can recall anyone better than him with how he impacts the game on both ends of the floor. His best asset is his shot-blocking and passing which shouldn’t overshadow how great of a rebounder, finisher, defender and energy giver he is. I guess you can pull him apart and say he is not a great shooter just yet but that is about it.” The scout said he could imagine NBA teams tanking in Victor Wembanyama-style for Flagg down the road. “When you talk about ceilings and upside, just imagine how good one can become and that is what you have with Flagg,” he said. “As long as he continues to develop properly, get stronger, play the right way as he does and make shots, we are talking about the next Wemba-like tank job for NBA teams.” Montverde coach Kevin Boyle, who has coached multiple top-3 NBA picks including former No. 1s Kyrie Irving, Ben Simmons and Cade Cunningham, said Flagg has only begun to tap into his talent because he can guard every position on the court. “Cooper is a tremendous athlete,” Boyle said. “He’s long, he’s growing into what’s eventually going becoming a phenomenal multi-position defensive player. “He can block shots and rebound and offensively, his shot has improved a lot. It hasn’t show so much in games yet but he’s shooting the ball much better in practice, and he’s starting to learn how to use ball screens and make decisions. “There’s some adjustments that everybody has to make at that age and he’s going to end up being a high, high, high first-round pick.” Follow Adam Zagoria on Twitter Follow ZAGSBLOGHoops on Instagram And Like ZAGS on Facebook