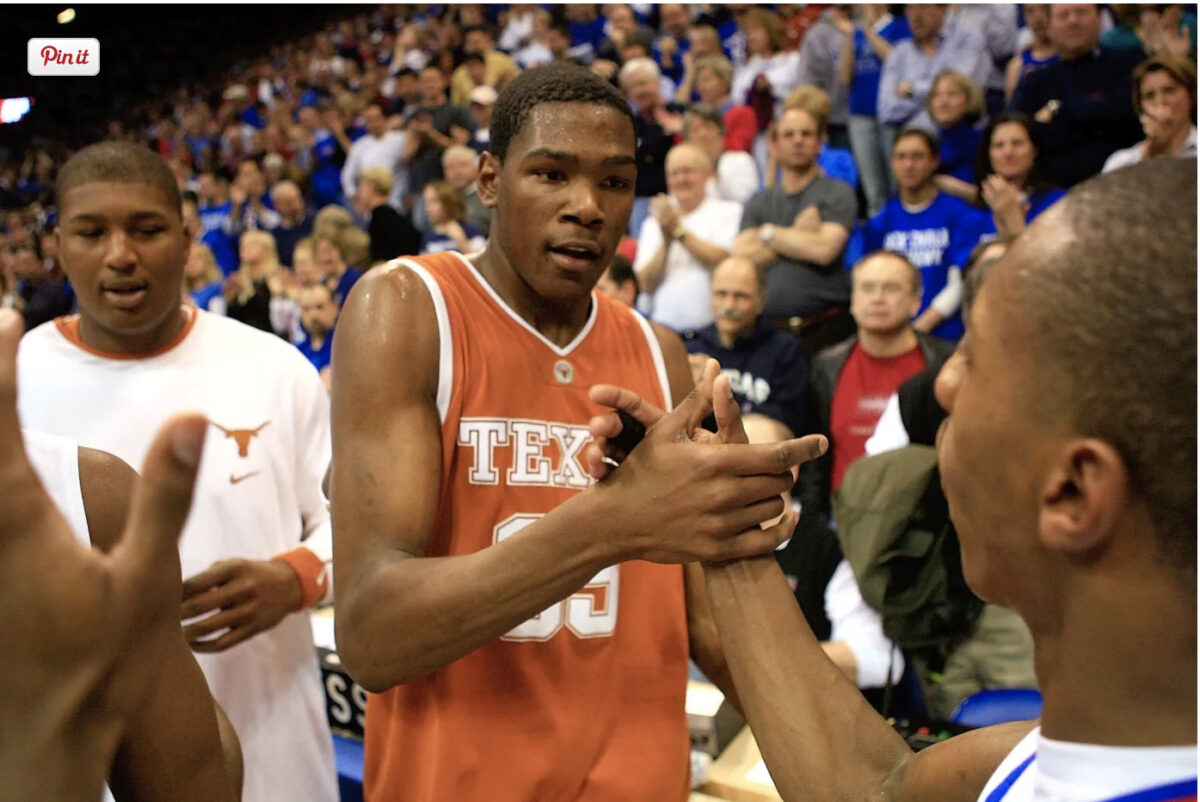 By ADAM ZAGORIA What if Brooklyn Nets star Kevin Durant had played for the UConn Huskies in his one-and-done college season? Former UConn coach Jim Calhoun said Durant told his friend Rudy Gay, who starred at UConn, he was coming to UConn for the 2006-07 season before he ultimately landed at Texas where he averaged 25.8 points, 11.1 rebounds, and 1.3 assists and then became the No. 2 overall pick in the 2007 NBA Draft. “He was going to come,” Calhoun, who had led UConn to NCAA titles in 1999 and 2004 ahead of the Durant recruitment, said in a phone interview after he made similar comments Saturday on Sirius NBA Radio. “He didn’t tell me personally, no. He told Rudy that.” He added: “That summer [2006], he and Rudy Gay went to France, I believe it was, with Nike, and as he got off the plane [in the U.S.], he told Rudy, ‘I’m going to see you. I’m going to see you. I’m going to room with you.’ So they made their plans to be together.” Durant was born in Washington, D.C., and Gay grew up in Maryland and they were close friends. But it should be noted that Gay left for the NBA after the 2006 season so they could not have roomed together, as Calhoun suggested they wanted to, for the 2006-07 season. Of course, North Carolina was the original favorite for Durant, who played one year at famed Oak Hill Academy (VA) with eventual Tar Heels point guard Ty Lawson. “We went to Oak Hill together. Roommates at Oak Hill. That was my boy,” Durant said during a 2020 interview with Tate Frazier.

I’ll never forget KD playing with UNC on NCAA Basketball ‘09 and telling the story of how he wanted to go to Carolina with Tywon Lawson pic.twitter.com/H62hmiZkwt

“They were recruiting me heavy with (Lawson),” Durant said. “They were expecting us to come together. I am going on official visits. I went to a game where they beat Duke at the buzzer. And they won a National Championship that year, my junior year in high school. So I was like, ‘Man I want to go to Carolina.’” Durant added: “They were stacked though. They had a nice senior class. They went to the Elite Eight that year. Tyler Hansbrough was there. Danny Green. All those dudes. So I would have gotten kind of lost. Not lost. Not lost, but I would have been playing 25 minutes instead of 40 minutes like I should have been playing.” Tom Moore, Calhoun’s longtime assistant and now an assistant under current UConn coach Dan Hurley, said he felt the Huskies were right in there for Durant, but North Carolina was the team to beat. “We recruited Kevin and it was going great,” Moore said in a recent “Topdogs” podcast with Rob Dauster of the Field of 68. “This was like pre-cell phone and I remember emailing Kevin every night when he was at Oak Hill, and he would email back. That’s how we talked and stuff. “He was a phenomenal player, we recruited him and all signs pointed to him going to North Carolina. I think he wanted to go there, obviously Carolina wanted him, I think Nike wanted him there. Like everything was lining up for him going to Carolina. “But Coach Calhoun was always like, ‘Hey, if it’s a great player and we think maybe we have a shot, just go for it. Just keep going.’ Coach Calhoun was one of those guys who didn’t mind taking a loss on a recruit if the kid was worth it.” Moore said he spoke to Durant’s parents, Wayne Pratt and Wanda Durant, and said “Wayne really liked UConn. He liked the Big East and he saw what we were doing with Rudy Gay. Rudy was 6-9 and we played him at the three back then.” Moore said Pratt saw Durant as a three, not a four, and “he said he’s almost like a two.” “And back then, that was almost unheard of,” Moore said. “And Wayne believed that if Kevin went to UConn, we would use him just like Rudy. Now Rudy was leaving….and he saw the way we used Rudy and he said [Durant] is probably going to be a one-and-done and would we be cool with that? Coach Calhoun was cool with it. But it was always like Carolina, and we felt we were in that next tier.” Durant and Lawson visited UConn together, along with Durant’s parents, and even spent time at Calhoun’s house. “Great visit…and all of a sudden they decided they’re not going to visit Carolina,” Moore said. “Like he’s getting closer and closer and they eliminate Carolina. So for like a week or two, I said to coach, ‘We might get him now because Carolina’s out.’ “And I think what Wayne’s fear was, as I remember it, Carolina had a lot of perimeter guys and I think he thought they were going to play Kevin as a four.” After the UConn visit, Durant then visited Texas. “I thought we could survive Texas,” Moore recalled. “They had a brand new facility…It was state-of-the-art technology to get in.” Several days later, Moore was driving to work on 195 in Connecticut when Durant called him and broke the news, “Hey, we’re going to Texas.” “I felt like taking the car and just peeling it into the side of the road when I got the news,” Moore said with a laugh. “And what made it harder was that next year, we had a rough year. All those guys from that [05-06] year had left and we ended up in the NIT.” Meantime, Durant was on ESPN’s “Big Monday” “every Monday night,” Moore cracked. As for Calhoun, when he looks back on what might have been, he said. “[We would have been] pretty good. You add Kevin Durant, that was a pretty good era of basketball here at UConn.” Follow Adam Zagoria on Twitter Follow ZAGSBLOGHoops on Instagram And Like ZAGS on Facebook