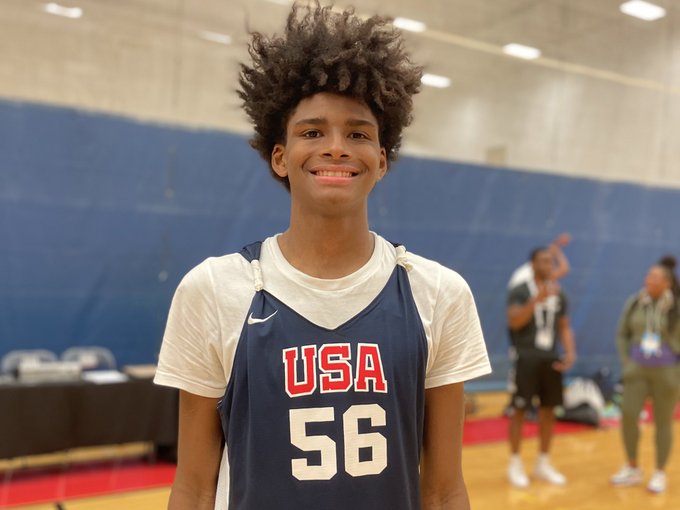 By ADAM ZAGORIA A.J. Johnson, the 6-foot-5, 170-pound point guard from Southern California Academy who is the last remaining uncommitted five-star prospect in the Class of 2023, has committed to Texas, he announced Monday. He chose the Longhorns over LSU and the professional route. N.C. State and USC had also been involved. He visited Texas the weekend of Sept. 10. “Texas, they work pretty hard,” Johnson said in an interview last month at the USA Basketball mini-camp in Colorado. “I just knew about Texas my whole life,” Johnson told Jamie Shaw of On3. “Like Kevin Durant went there, they have had so many pros that went there. Their NIL is crazy right now, like just their marketing of players and everything. Texas is such a big school. When I visited, I saw I like their offense for sure. I lived out about their, their stuff too. I saw they didn’t really run that much practice. They have one little thing they do once a month where they do a little running drill up and down, and they got to make it in a certain amount of time, then they’re done. So I didn’t know that they just play a lot.”

Extremely easy to coach. No antics no excuses just hoop. Cat quick at 6’6 with elite instincts & athleticism. His length & athleticism with the combination of ball skills is scary. Ton of wiggle, pop, & fluid movements. Production plus projection! One of the best in the country. https://t.co/MFN7m3EpMc

Texas head coach Chris Beard had a message for Johnson. “Basically that he wants to win a National Championship,” Johnson said. “He wants to coach me. He wants me to make an impact at point guard, and help win the National Championship.” Joining Johnson on his visit to Texas was close friend and current Houston Rockets guard Jalen Green, who he has known since he was 10 years old. Both work with trainer Mike Hill. “We grew up in the same area,” Johnson told ZAGSBLOG at the USA Basketball mini-camp. Green, who went from Prolific (CA) Prep straight to the NBA G League Ignite, gave Johnson advice on the route. “He tells me that you’ve got to work hard to get [to the NBA],” Johnson said. “It’s not going to be easy. When you make it it’s going to be even harder ever single step, so you just got to keep putting in the work and be a sponge and just want to get better and stay hungry.” Despite all the attention, Johnson said just wants to keep grinding and get even better. “I’m a sponge,” he said. “I just want to get better and become the best player I can be. I am just grateful for how I shot up so high in the rankings, though I’m not really worried about that. I just put my head down and grinded and wanted to get better and it everything started to come out of nowhere.” Photo: ELITE High School Scouting (@EliteHSScouting) Follow Adam Zagoria on Twitter Follow ZAGSBLOGHoops on Instagram And Like ZAGS on Facebook