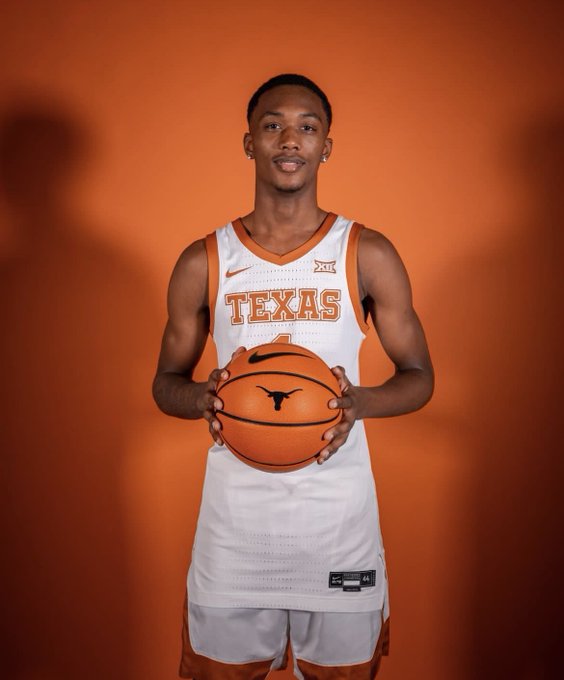 By JACOB POLACHECK Class of 2023 five-star forward Ron Holland has officially signed with Texas after verbally committing last Saturday. ESPN’s Paul Biancardi was first to report the news. Holland, the 6-foot-8, 195-pound power forward from Duncanville (TX), chose Texas over Arkansas and UCLA. “Ron Holland is one of the most intense prospects in the country with his business-like approach,” said Paul Biancardi, ESPN’s national recruiting director for boys high school basketball. “A developing skill set allows him to make jumpers, be a straight-line driver and post up. He will manufacture points by filling the lane, cutting and hitting the offensive glass. Ron’s greatest strength is his defense. He is serious about guarding both his man and helping his teammates. Ron is the best switch-defender in this class. He reminds me of NBA star Jimmy Butler with his defensive approach, offensive production and winning mindset.” During his junior season in 2021-22, Holland averaged 15.9 points, 7.9 rebounds, 2.9 assists and two steals in 23.9 minutes per game while leading Duncanville to a 35-1 overall record and the Class 6A state championship. Duncanville finished the season at No. 1 in MaxPreps and No. 2 in ESPN’s national rankings. Holland was selected as MaxPreps National Junior of the Year last season. “Ron Holland is a winner,” said Kellen Buffington, scout and evaluator for TheTB5Reports. “He is a versatile player who has really improved his skill set over the last few years. Ron is consistently productive due to his motor, toughness and will to win. He excels at what Coach Beard demands: toughness and competitiveness.” In his sophomore season in 2020-21, Holland averaged 13.8 points and 10.1 rebounds per contest while helping Duncanville register a 29-1 mark and capture the 6A state title. He led the Texas 6A Region II district in rebounds per game (10.1 rpg), double-doubles (16) and total blocks (27) and was third in total steals (35). Holland was tabbed a Sophomore All-America second-team selection by MaxPreps in 2020-21. Over his sophomore and junior seasons, Holland helped Duncanville post an overall record of 64-2 with a pair of Class 6A state championships. Duncanville also was a heavy favorite to win the 6A state title in his freshman season before the state tourney as canceled due to the COVID-19 pandemic. In addition to his success at the high school level, Holland has also claimed a pair of gold medals with Team USA in summer competitions. This past July, he averaged 11.1 points and 6.6 rebounds per contest while leading Team USA to a gold medal at the FIBA U-17 World Cup in Spain. The previous summer (August 2021), Holland averaged a team-best 19.0 points and team-high 10.2 rebounds per game while pacing Team USA to a 6-0 mark and the gold medal at the FIBA Americas U16 Championship in Xalpaia, Mexico. He recorded a double-double in each of his last three games at the FIBA Americas U16 Championship, including a 21-point, 12-rebound effort in the 90-75 victory over Argentina in the gold medal game. “Ron Holland in one word is a winner,” said Blue Zertuche of Great American Shoot-Out “GASO.” “He is unique in that he has won from the moment he stepped on to the court at Duncanville High School, and that is a quality that will translate to the Big 12. He also has won at the international level with Team USA. Ron’s strength is to lead and to work hard through any situation. He shares Coach Beard’s qualities in that he competes and does whatever it takes to win each play. Ron seeks out the ball on either end to make a play by using instincts and athleticism. With the development he will receive from the Texas staff, Ron’s winning mentality will bleed over into the locker room and of course, on to the court.” (This post was updated 11/12 at 3:37 p.m.) Follow Jacob Polacheck on Twitter Follow Adam Zagoria on Twitter Follow ZAGSBLOGHoops on Instagram And Like ZAGS on Facebook